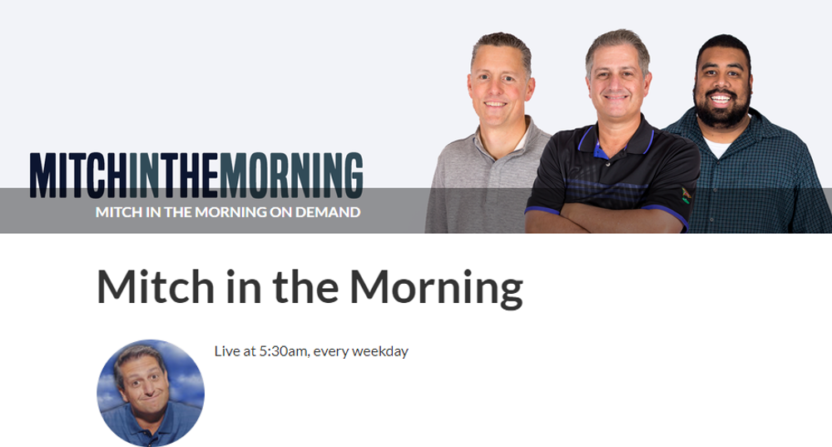 Mitch Levy (seen at center above), host of morning show Mitch In The Morning on Seattle station Sports Radio 950 KJR, has reportedly been arrested in a prostitution sting in nearby Bellevue, Washington. Jason Barrett has the details at Sports Radio PD:

Bellevue, Washington police ran an undercover operation, which included opening up a brothel for seven days at a local condominium to attract unsuspecting sex buyers. They posted online ads to entice individuals to come forward, engaged in explicit text messages with potential customers, and when those men showed up, they were arrested.

A total of 110 men were locked up and over 100 cars, motorcycles and bikes were impounded. Among those put behind bars were a large number of technology workers and Seattle sports radio morning host Mitch Levy.

According to the police report, Levy placed $160 in cash on a bedside table in anticipation of a half-hour of sex. He told one of the arresting detectives he played golf earlier in the day and was there for a massage. The police report debunks that notion though adding that there was no other reason for Levy to be at the condo other than to buy sex.

Levy was booked into jail on August 26th before posting $500 bail. He’s since been charged with misdemeanor patronizing a prostitute.

As Barrett notes, it’s the second time this week KJR has made the news. The Seattle Times previously banned all their writers from appearing on the station, which the paper claims is because of the “off-color” and “sexist” remarks heard on KJR, but which Alex Avita of Seattle SportsNet chalks up to criticism of the Times‘ coverage of competing Seattle arena initiatives.

This isn’t the first time a sports media figure has gotten in trouble over a prostitution sting. CBS and Turner’s Greg Anthony was arrested in a D.C. sting in January 2015, and was suspended as a result, and NFL Network’s Warren Sapp was arrested in a Phoenix sting around the Super Bowl that February (he was fired soon afterwards). KJR hasn’t issued a statement on Levy’s arrest or if it will affect his job yet.