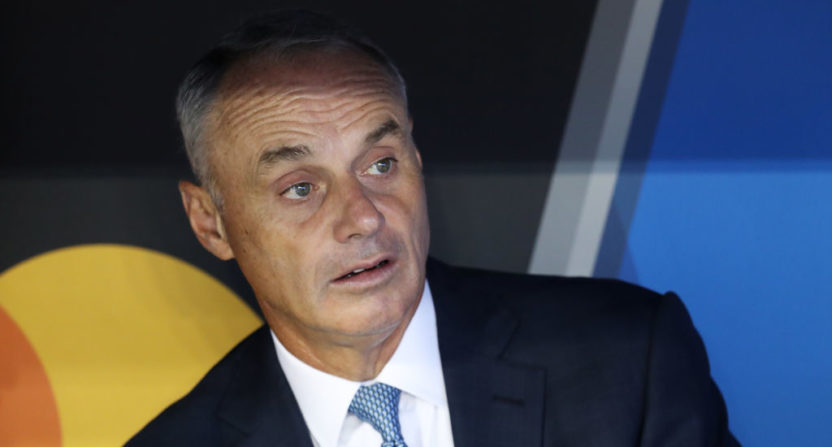 The Los Angeles Dodgers are in their fourth straight season of having local broadcasts only visible on Charter Communications (formerly Time Warner Cable), and MLB commissioner Rob Manfred isn’t thrilled about that, but he’s also not planning to intervene. Dodger fans who subscribe to other cable and satellite providers, including DirecTV and AT&T U-Verse, remain unable to get SportsNet LA thanks to those providers refusing to pay what the channel’s demanding, and Charter isn’t available in certain parts of the LA area. However, Manfred told Bill Shaikin of The Los Angeles Times he’s not going to tell the club to change their TV deal, and he doesn’t “have a seat at that table“:

“First of all,” Manfred said, “Dodger fans can in fact see the games if they become Charter Spectrum subscribers.”

That is not an option for fans outside Charter Spectrum territory, primarily those on the Palos Verdes peninsula and in southern Orange County.

Fans unable or unwilling to sign up for Spectrum have not seen most Dodgers broadcasts since 2013. The Dodgers’ cable contract extends through 2038, with no end in sight to the dispute. If the Dodgers did wish to renegotiate or redo their television agreement, they probably would have to take less money for their cable rights.

“It’s not my job to tell a club to renegotiate its television agreements,” Manfred said. “I think the much more productive course, and we have pursued this course, is to try to work with the parties who actually have an economic interest here” — the Dodgers, Charter and cable and satellite operators.

“I remain very concerned about the issue,” the commissioner added. “As I have said repeatedly, I don’t have a seat at that table.”

So, Dodgers’ fans annoyed by this shouldn’t expect help from the league office any time soon. And with that contract not expiring until 2038, the team/SportsNet LA side not wanting to lower their per-subscriber rate, and the providers who declined to add SportsNet LA not losing significant subscribers over this, there doesn’t seem to be a lot of incentive for anyone to fix the problem. It’s notable that even AT&T’s settlement with the federal Justice Department over orchestrating anti-SportsNet LA collusion didn’t require them to pick up the channel. Thus, with the local sides not seeing much reason to move from their entrenched positions, and national entities like MLB and the Justice Department not applying much pressure, it seems the challenges for those wanting to watch the Dodgers will continue.