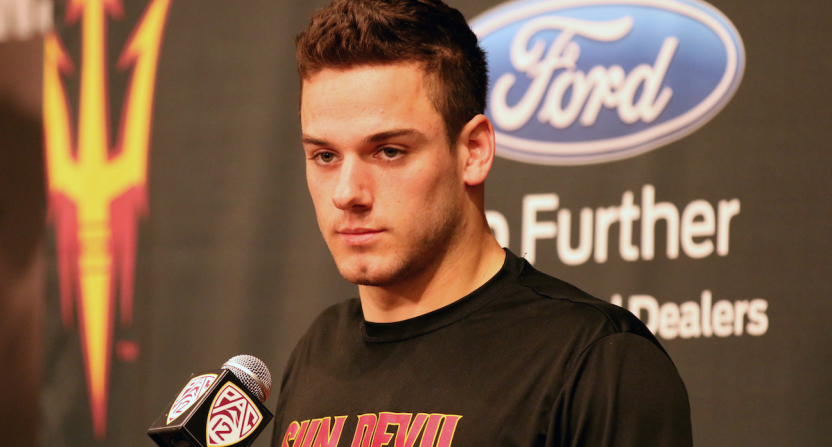 Sports fans want honesty from local reporters and commentators covering their teams. Above all, fans want analysis of their teams to reflect what they see on the field. If a team isn’t playing well, don’t sugarcoat it. Don’t just repeat the company line.

But when someone in the media works for the entity in question, such honesty isn’t always appreciated by those employers. Jordan Simone, now a former pregame host and sideline reporter for the Arizona State Sun Devil Radio Network, discovered that harsh reality when he was fired after comments he made on a podcast.

Simone, who’s been a reporter on Arizona State football radio broadcasts since 2018 and has also worked as an analyst this season, appeared on the Speak of the Devils podcast to discuss the current state of the Sun Devils football team and the job performance of head coach Herm Edwards. Arizona State has lost its past two games, allowing a combined 69 points, and is 3-2 for the season.

Jordan Simone, one of the most passionate Sun Devils in the Valley, removed from team broadcast for saying that ASU's football is poorly coached? On a podcast? Herm Edwards should know about this, and if he already does, he should be ashamed https://t.co/gKUybrXwHO

Arizona State’s 34-21 loss to Washington State was particularly troubling, considering all of the upheaval the Cougars have experienced after head coach Nick Rolovich and several assistants were dismissed for refusing to be vaccinated for COVID-19. The Sun Devils also had a week off before the WSU game, yet were defeated soundly by a team with an undermanned coaching staff and uncertainty throughout the roster.

Simone — a Sun Devils safety from 2014 through 2015 and a team captain under previous coach Todd Graham — went on to call the football team’s effort a “disgrace” and a disservice to the players and alumni in attendance, notably those from the 1996 team on hand to celebrate the 25th anniversary of winning the Pac-10 and going to the Rose Bowl.

I have nothing but love for the football program and University. I’m as proud of a Sundevil as you’re going to find and I will miss my time on the sidelines.

Evidently, someone associated with the Sun Devil Radio Network didn’t think those remarks were appropriate. Simone confirmed on Twitter that he was fired because of what he said on the podcast.

ESPN anchor Matt Barrie was among those who defended the Sun Devil Radio Network’s decision, pointing out the difference between working for the football program versus an unaffiliated radio station or TV network.

1/4 When you’re employed by the school, via the radio network, there is risk in blasting the team you share a sideline with. In fact, it’s widely frowned upon at any level, college or pro. Jordan is a passionate former player who loves ASU, and like many is frustrated.

Arizona State was expected to compete for the Pac-12 championship, bringing a veteran team into the 2021 season. Instead, the team has looked outmatched throughout the season. Going into halftime of the Washington State game, the Sun Devils had been outscored 56-0 in its previous four quarters.

Edwards was an unusual choice for the head coaching position, taking the job after eight years as an NFL analyst at ESPN, has compiled a 22-16 record with four games remaining on the 2021 schedule. The Sun Devils host USC on Saturday amid calls among Sun Devils fans for Edwards and athletic director Ray Anderson to be fired. If it turns out Anderson pushed for the decision to fire Simone, that uproar will only get louder.