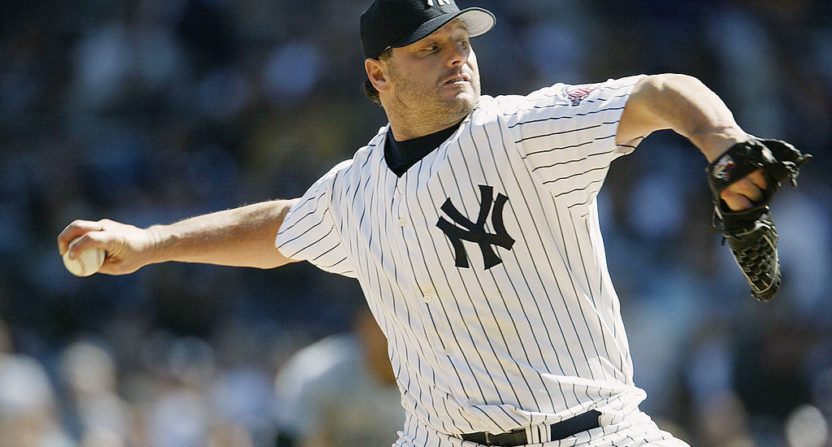 When you’re bringing in someone as a guest analyst for one MLB game, does it help if they’re a prominent former player who holds numerous club records? Sure! But it also might help if the team in question isn’t the Boston Red Sox and the player in question isn’t Roger Clemens, who there’s a well-established tradition of hatred for in Boston at this point. That’s exactly what Red Sox broadcaster WEEI is doing, though, announcing that Clemens will fill in for Joe Castiglione (alongside Tim Neverett) during the team’s June 16 game in Houston against the Astros:

Roger Clemens is about to become a Red Sox radio broadcaster.

The Red Sox Hall of Famer is scheduled to sit in with Tim Neverett during the Sox’s June 16 game against the Astros in Houston. Clemens will be filling in for Joe Castiglione, who is off for the three-game series.

It will be the first time Clemens has sat in for an entire Red Sox broadcast, either on radio or television.

Clemens played with the Red Sox for 13 seasons, while having also pitched for the Astros from 2004-06.

The WEEI tweet announcing this did not go over so well:

Can't wait to not listen.

I guess if he didn't cheat in Boston that makes it ok….?

Who is filling in for Brian McNamee?

As noted there, some will certainly take issue with this move over Clemens’ alleged use of performance-enhancing drugs and his courtroom drama. The even bigger issue may be how Clemens wound up with the hated rival New York Yankees (1999-03 and 2007), though. The Boston Globe‘s Chad Finn wrote a piece on this last year after Clemens returned to Fenway Park for a celebration of the 1986 team, one titled “Should Red Sox fans forgive Roger Clemens? Um, are you from around here?”

I don’t know if we’ve forgotten any of the ways Clemens oafishly belittled the Red Sox since departing as a free agent following the 1996 season, his 13th year in a record-setting but unfulfilled run with the franchise.

…But did he have to be such a tactless dope about … geez, everything? Like signing with Toronto for the most money when he said he’d leave only for his home state of Texas (to be fair, there’s a decent chance he thought they bordered each other) … or negotiating language into that contract that allowed him to ask out after two years, then manipulatively bandwagon-hopping on the Yankees’ juggernaut … or joining southpaw pantload David Wells in rubbing Babe Ruth’s monument – and rubbing it in – after Game 7 of the 2003 ALCS, the pinnacle of the Yankees’ dominance of the rivalry and the low point for many Red Sox fans who had once rooted for him … or leading Larry Lucchino and the Red Sox to believe he’d come back during the 2007 season, only to, oh my goodness gracious, show up in George Steinbrenner’s box and rejoin the Yankees.

…Clemens, incapable of candor and sometimes seeming incapable of honesty, is a different case. Unlike Boggs, who always seemed bothered by the separation from Boston, he never gave a damn about the Red Sox unless he needed them. He needs them now. On pure accomplishment, he’d have been a first-ballot Hall of Famer, perhaps someone who challenged for the highest vote percentage ever. Instead, because of the stench of his association with performance-enhancing drugs, he’s four years into his candidacy and on the outside looking in, with a high of 45.2 percent of the vote this year.

As Finn notes, too, Mr. Boston Sports Guy himself, Bill Simmons, wrote an ESPN column decades ago titled “Is Clemens The Antichrist?”, and a lot of what’s written there still seems to be true:

My bosses at Page 2 gave me a simple assignment this week: “Please explain to the world why Boston fans believe that Roger Clemens might be the Antichrist.”

Even the most ardent Rocket-hater would concede that Clemens built a Hall of Fame resumé over the years. He certainly won enough games — 265 and counting, including five different 20-win seasons. He rang up enough K’s over that time — 3,575 and counting, not to mention all of his children who have names starting with the letter “K” (Koby, Kody, Kodachrome, Kornonthekob and so on). He has more than enough Cy Young trophies (an astounding five), World Series rings (two and counting) and records (including the hallowed “Only Guy to Strike Out 20 Batters Twice” mark). He made enough money over the course of his career to fund a Michael Bay movie — $60 to $70 million at least, not including endorsements and other goodies. Yup, all the elements are there … except one.

He doesn’t have any.

And that’s what makes Clemens so unique, the fact that he keeps chugging along in his late-30s, pitching as well as ever … and yet nobody cares about him. He’s like the Wolf in “Pulp Fiction” — no attachment to anyone or anything, a hired gun, a means to an end. Red Sox fans loathe him. Blue Jays fans despise him. Yankees fans tolerate him, but they haven’t embraced him and never will, not with his Boston connections.

That’s perhaps the really interesting thing with this move. This isn’t about if Clemens was a great player or not, and it’s not even the debate about if he should be in the Baseball Hall of Fame regardless of his alleged PED use. It’s a question of what WEEI has to gain by using him as a broadcaster for a team where the fans seem to largely hate him at worst, and are pretty indifferent to him at best. And it’s not like there aren’t tons of beloved former Red Sox players they could have used instead.

Picking Clemens is certainly an attention-grabbing move, and maybe it will be enough of a stunt to get people to tune in for this one-game-only event. However, it sure seems to be pretty significant trolling of a large segment of their Red Sox-fan audience. Bringing in Clemens will certainly get some people to notice, and it might draw a bigger audience than you’d normally find for a mid-June game against Houston, but there could be some goodwill costs here.