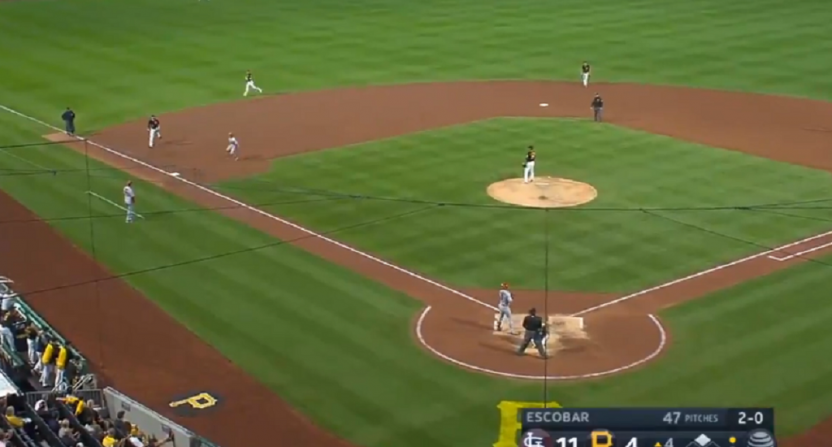 The St. Louis Cardinals jumped on Jordan Lyles (8 R, 5 ER in 1 2/3 IP) and the Pittsburgh Pirates’ pitching staff for 13 runs in the first four innings of Wednesday night’s game at PNC Park. At one point in the fourth inning of the Cardinals’ 14-8 win, they had an 11-4 lead with one out and Yairo Munoz on first.

Well, Munoz took off running to steal second base, and then third base. Pirates announcers Greg Brown (play-by-play) and Bob Walk (color commentator) of AT&T SportsNet Pittsburgh were stunned that Munoz would steal bases in a seven-run game:

Brown: (Laughs) Yeah. The Pirates… well they’re holding him on, I guess. Always wonder about those unwritten rules.

Walk: The rules… the unwritten ones, anyway… well even the ones that are written down, they’ve changed a lot over the last 10, 20 years.

Brown: And he’s taking off for third! And even the fans don’t like it.

Walk: Yeah, they might not be booing the Cardinals.

Walk: He’s got the right helmet on (face guard covering his front side).

Brown: (Laughs) I know he wouldn’t like it. I know he wouldn’t like it. He’s still old school. I guarantee ya… ya get him off to the side and ask him what he thinks of stealing second and third up 11-4… and a four-pitch walk… and Escobar might not be long for this outing. Clint Hurdle was obviously hoping to get a lot of innings out of him. He let him bat in the bottom of the third with a runner at second.

Brown: (Laughs) That’s right! Why not?

Here we go again with the unwritten rules and dopey takes about them.

This was a seven-run game — in which one team had already scored nine runs in a single inning (the Cardinals’ second inning) — with six innings still remaining. Was it quite likely the Cardinals would win the game? Of course. FanGraphs gave the Cardinals a 97.6% chance to win before Munoz stole second base. But a lot can still happen in six innings (or just one inning, as the Cardinals showed), especially in a season where the (juiced) ball is flying out of the ballpark like never before.

Are the Cardinals supposed to just go base-to-base and not be aggressive on the basepaths for six innings (or 2/3 of the game) because they took a seven-run lead? How about the Pirates actually get batters out and pay attention to runners on the basepaths instead of allowing 13 runs in four innings? The Cardinals shouldn’t be penalized and have to stop trying hard because the other team can’t get their batters and baserunners out. And what if the Cardinals indeed stopped taking extra bases to be nice, only to see the Pirates make a comeback? It’s not like seven runs in four innings is some miraculous task.

Oh, and when do these “unwritten rules” officially come into effect? What’s the cutoff point in terms of a lead and inning for Yairo Munoz to know if it’s okay if he can run or not?

This is just one of a number of bad looks for the Pirates’ television broadcast this season.