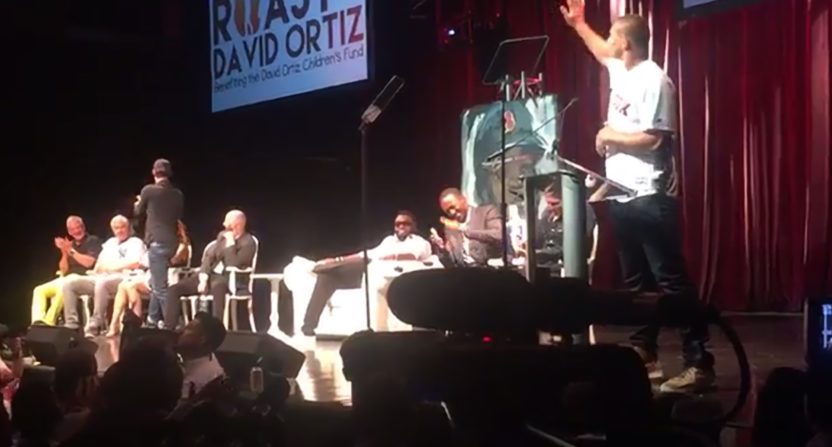 It was part of the David Ortiz retirement weekend. Celebrities, comedians and athletes all gave it to the former Boston Red Sox designated hitter at a roast on Thursday. But due to the material which made the audience at the House of Blues in Boston cringe and howl, NESN won’t be airing the roast as planned.

The roast included comedians Bill Burr, Lenny Clarke and Sarah Tiana, actor Anthony Mackie as well as Patriots tight end Rob Gronkowski (you can check out some of Gronk’s material at The Comeback). They not only crossed the line, but they totally obliterated it. There were jokes about the late Aaron Hernandez who killed himself in prison, cracks on race and ethnicity, jokes about Red Sox second baseman Dustin Pedroia’s height to just about every subject the roasters could get their hands on.

NESN was scheduled to air the roasts on Saturday at 6 p.m. ET and again on Sunday at 8 p.m., but due to the material, the network elected to take it off its schedule. According to the Boston Globe, NESN will not broadcast the roast at all, but there’s video of Gronkowski skewing Ortiz and the other roasters available on TMZ.com. You can get a flavor of what the roast was like.

NESN was hoping to have the roast be part of its programming honoring Ortiz who’s having his number retired by the Red Sox, but instead, the network will have to insert something else such as Charlie Moore Outdoors, Dining Playbook With Billy and Jenny or even an infomercial.

NESN could have chosen to air the material, but even being on basic cable, it would probably have to insert a lot of bleeps to censor the offending material so it was best to delete the show off the schedule and keep it off.