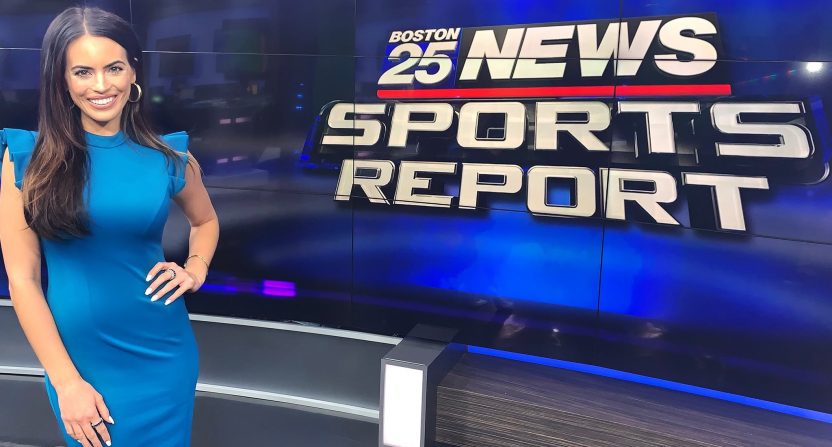 In the social media era, someone is always watching and can cause outrage at a moment’s notice. It happened to NESN anchor Kacie McDonnell on Monday.

During a segment on Monday’s Boston Red Sox-Minnesota Twins game called “The Social Stretch,” McDonnell pointed out someone who was eating mayonnaise out of a huge jar at a Memphis Redbirds game.

The fan spilled some mayo on his t-shirt, in which some slang terms is called a “guinea tee.” McDonnell used that term Monday night on NESN:

Kacie McDonnell on NESN just said “guinea tee,” that is goddamn ridiculous. Can NESN do anything right at all? pic.twitter.com/OtO4v0k1B4

As you can see from the tweet, someone was offended by the term. If you’re not aware of it, Urban Dictionary defines the term as “a sleeveless mens undershirt; a wifebeater or muscle T (From the stereotype that italians wear these shirts; see guinea).” For some, just the use of “guinea” to describe Italians is offensive.

Reaction on Twitter was mixed- some calling for McDonnell’s firing, others saying they weren’t offended. But McDonnell issued an apology on NESN anyway, just before her regular “Social Stretch” segment during Tuesday’s Red Sox-Twins game:

”… before we get to tonight’s Social Drive (sic), I’d like to take a minute to apologize to our viewers in particular those who I offended by an insensitive comment in my report last night. There’s no excuse for my use of hurtful words and again for that, I am truly, truly sorry.”

NESN and McDonnell hope to move on from this. There’s no word if there will be any disciplinary action taken against McDonnell.