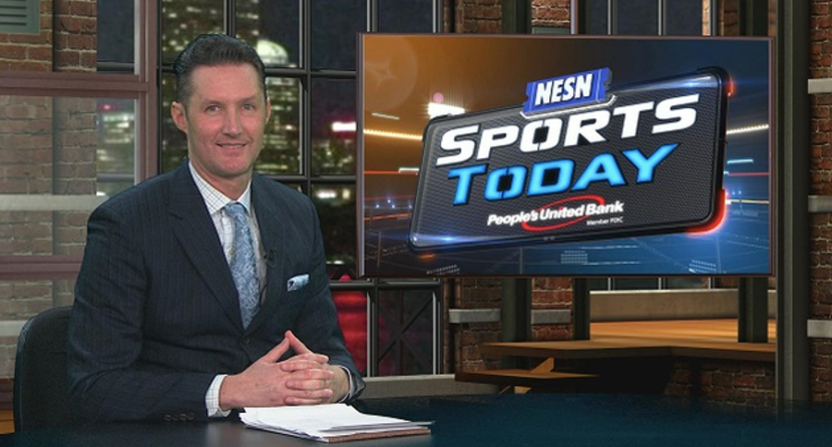 The stories on alleged sexual harassment and sexual assault from movie executive Harvey Weinstein sparked plenty of discussion of harassment in all fields, and a story along those lines is now circulating through the sports world. Alyssa Labrie posted on Facebook on Oct. 7 that a NESN personality approached her this summer while she was doing a photoshoot to get her contact information and mentioned that he was an on-air broadcaster with NESN’s Sports Today.

The 22-year-old Labrie, an aspiring actress who works in modeling, gave him her contact information hoping to network professionally, but then received repeated texts asking her to meet for drinks, photos of him at various stadiums, and more. She stopped responding to him, then later told him she wasn’t interested, and he “became instantly irate and blew up in my face with personal attacks on my appearance, career choices, and place of residence.”

Caroline Phinney covered the story at Babe Oct. 8, and Ali Reid went further Oct. 9, identifying the man in question as Marc James and speaking to him, as well as some of his former coworkers (most notably from Tampa sports station WHBO 1040, where he broadcast under his real name, Marc Benarzyk).

And those comments look particularly bad for James. He also claimed that the most recent texts weren’t from him, but from a “female friend”; Labrie and others cast some skepticism on that story.

Update: A NESN source tells AA that James has been suspended for two days. The original post follows.

Here are Labrie’s two posts on the situation in full, complete with screenshots of texts from James:

Reid’s post is particularly notable for its conversations with some of James’ former coworkers:

Bill Freitas, former co-host to James who worked alongside him at WHBO 1040 in Tampa, Florida back in 2008, recalled his 11 months on-air with him… “His arrogance when it comes to the opposite sex almost is a caricature. It’s almost as if he’s acting 24 hours a day like he’s some sort of a bad boy.”

Freitas jokingly, yet in a serious tone quoted, “Creeper is accurate but almost seems a little too weak. We may need to come up with something a little better. It was just a very skin-crawling effect for anyone who would come into contact with him.” and that “he must be a better ‘BS-er’ than I give him credit for because he still seems to have a way of convincing people that he thinks he’s as good as he thinks he is.”

He wanted to remind James that, “Karma really takes it’s time. The playing field is going to be level one way or another, and I just hope that I have a good seat to watch it.”

… “I joked after he finally burned his last bridge in Tampa that the only way he’d get back in broadcasting is leave the state and change his name. And that’s exactly what he did.”

…Rob Vancleave and Pat Donovan also were more than willing to share personal memories they’ve had with him.

“He was just an a-hole” Rob Vancleave said, “We would do live broadcasts from a knock-off Hooters-type restaurant, so of course Marc would pick out ones (women) that he was really into, and would start texting them. A few weeks later, the company ended the contract/brand deal with our radio station. Rumor has it that Marc was being so awful to them, sending them harassing text messages, and doing basically the exact same thing that he did to this girl. (Alyssa Labrie) Again, that was a rumor that went around our station, so I don’t want to say that it was a fact, but those actions were very much in his nature.”

Former part time Host/Board-Op for WHBO 1040, Pat Donovan, recounted a stroll he once took with James around the baseball field. “He actually one time asked me to walk around the ballpark with him so that he could talk to girls. He saw this chick and how hot she was and he had told me that he wanted to hit on her. He comes across as this confident man, but when you get to know him even just a little bit, you can see right through that, and you realize how unbelievably self-conscious he is… like, exceedingly. He is one of the few people that I have ever said to his face that ‘I dislike you’, and, ‘you’re a bad person’.”

James certainly has had plenty of different broadcasting stops. A critical post referencing his name change and his move to a Charlotte station appears on a Carolina Panthers’ forum in 2011, saying “he’s changed his name to James because he burned so many bridges in Miami and Tampa he didn’t want it to find him in his new gig,” and the Atlanta Journal-Constitution‘s Rodney Ho posted an unusual story about James’ departure from that market in 2015:

92.9/The Game morning host Marc James is out after 16 months but the circumstances of his departure are kind of murky.

Three sources said they heard he was gone and though program director Terry Foxx has not gotten back to me, I decided to post this because James has been wiped off the website. That’s usually a good sign someone is gone. James’ Twitter no longer references the Game.

Why was he cut? There is a story floating around that James sought autographs from Mets players at a recent Braves game, the type of fan-like behavior sports talk show hosts and sports reporters tend to avoid.  I am not sure how true this is but heard it from two very different sources.

James was hired by NESN in May. Their release at that point mentions that he came to them from CBS Sports Radio, that he’d also worked in Fort Lauderdale, Tampa, Charlotte, and Atlanta, and that he had a B.A. in communications from Arkansas, a master’s of education in sport administration from Georgia and a master’s of arts in broadcast journalism from Miami. As per his response to all this, here’s the key part of what he told Reid:

“First of all, I can tell you that I was with a bunch of people last night watching college football, and one of the people I was with was a girl, and she mentioned ‘hey, you’re getting some text message from this girl, Alyssa’ to which I replied that I had asked her to meet up. After the girl scrolled through our previous texts, she mentioned that Alyssa was being a bitch to me, and wanted to go back and forth with her. (over text) I said to not do anything at all, and to not tell her anything. So then after seeing this article, and not finding the text message exchange on my phone, I reached out to the girl who then told me she had blocked and deleted her… (from my phone) so I had no idea. The phone was not in my hands for that period of time last night and I can guarantee you that none of those texts are on my phone. I was extremely irate when I read this, (article written by Babe) and this is definitely not me… at all, at all.”

Labrie criticized that response in her own post Tuesday:

I am completely convinced that this is an entirely false, manufactured alibi to try and save what little credibility he has left. I don’t know a single woman that would ever see a very polite let down from another woman and would feel so vehemently offended for her male friend that she would feel the need to verbally attack the character and appearance of the woman all for the sake of preserving her male friend’s ego. It simply doesn’t add up. There’s also no way this female friend would know what color my hair is or where I work in order to use it against me without asking Marc directly, thus making him aware of the fact she was texting me. Ali requested this female friend’s contact to have her confirm his alibi. No such woman ever reached out.

And some of James’ past colleagues told Reid it seems likely he did send those most recent texts:

“There’s a certain behavior I’ll never let slide. I read the story. I’d bet my life on it that he sent those texts. Please put that on the record!” said Donovan.

“That’s him. That’s exactly how he communicates. His use of all caps is unmistakable.” said Freitas.

We’ll see where this story goes from here.