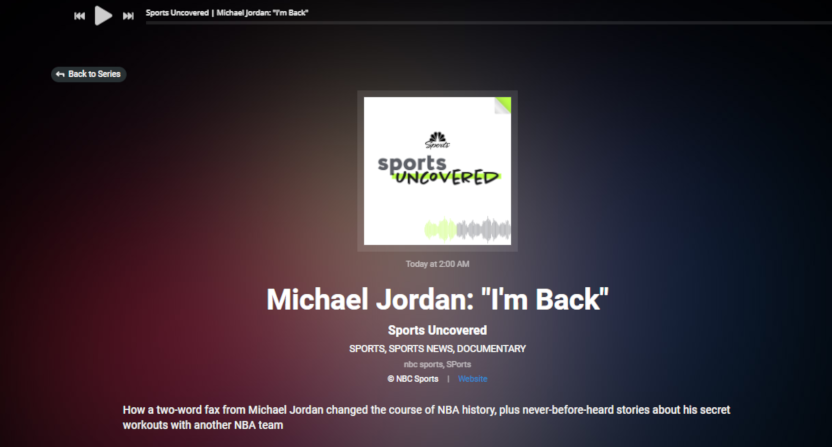 Over the last few years, NBC Sports has made moves to provide some content and features across their various RSNs, from hiring Tom Haberstroh as a national NBA insider for all the RSNs to launching the MyTeams app to teaming with Religion of Sports for short-form and long-form mental health features aired across the networks. Their latest move on this front is a “Sports Uncovered” podcast, which will see episodes produced by different NBC RSNs, but a standard distribution feed and an introduction for each episode from NBC Sports’ Mike Tirico. And the series kicked off in a big way Thursday with the release of “I’m Back,” a one-hour podcast produced by NBC Sports Chicago that covers details of Michael Jordan’s 1995 return to the NBA, including some new information on his pre-comeback workouts with the Golden State Warriors. Here are some quotes from the release:

Tim Hardaway revealing MJ practiced with Warriors: “The reason why I’m smiling, I might get in trouble for this. Him and Rod Higgins are really, really good friends. He came and practiced with us two or three times and we knew he was coming back then. He just took over our practice, just took over our practice. He got five guys that wasn’t playing that much, and he said ‘us seven will play you all’s seven in a scrimmage,’ and it was like he never left.”

Rod Higgins on MJ/Warriors practices: “Michael was a Warrior for 48 hours…he came in and (Warriors equipment manager) Eric Housen dressed him out in Warriors gear, he might have given him number 23. Once Michael got warmed up, you could tell his objective was to basically kick Spree (Latrell Sprewell) and Tim’s (Hardaway) behind, and talk trash to them.”

Chris Mullin on observing MJ against younger Warriors stars: “I always thought he was coming back, but a day like that…he was just so fit, so it wasn’t a physical thing, but seeing him on the basketball court and playing against, Sprewell was a really good player and he was in midseason form, for him to do that, I thought it’s just a matter of time.”

Tim Grover on MJ vs. Sprewell in Warriors practice sessions: “My take on this…Latrell was one of the more explosive, more athletic and he was probably one of the better players during that short run that he had. So what Michael needed to know, even though I took the time off, can I still come back and kick his ass?… and in his mind he’s like, ‘I’ve been gone from this game for how long? And he’s supposed to be the top player? Alright.’ He wasn’t testing himself against Sprewell, he was testing himself against himself.”

In addition to those figures (Hardaway and Mullin played for the Warriors then, Grover was Jordan’s trainer, and Higgins was a former teammate of Jordan’s with the Bulls who also had some stints with the Warriors), the podcast features interviews with then-NBC reporter Ahmad Rashad and long-time Bulls’ photographer Bill Smith about being inside Jordan’s private locker room ahead of his comeback game. It also includes interviews with Jordan’s agent David Falk, with then-NBA senior VP of basketball communications Brian McIntyre, and with players and former players Steve Kerr, Toni Kukoc, Horace Grant, Dominique Wilkins, Robert Horry, Glen Rice, and LeBron James. That’s an impressive list of interviewees for a single podcast, and it fits with this series’ approach of “utiliz[ing] exclusive, in-depth interviews with prominent participants, witnesses and experts to explore new, underreported or forgotten aspects of well-known topics centered in each of the NBC Sports Regional Networks markets.”

The approach of spreading these episodes out amongst the different NBC RSNs (NBC has seven owned-and-operated RSNs) is an interesting one, and it has some merit. It would be difficult for a single one of these RSNs to do a lot of these in a short time based both on resources and topics, but spreading that out over the RSNs makes that much easier. And the list of upcoming episodes has some notable stories from each network’s area:

While most RSN content is specifically focused on fans of that RSNs teams, these are stories that perhaps have the chance for some wider appeal, especially given the in-depth treatments they’re planning. The main audience here is still likely fans of the team in question, but this sort of approach is closer to what we’ve seen with national networks’ documentaries, which are shooting for a national audience in addition to fans of the covered team. (And “I’m Back” in particular is a good one to start with given all the recent attention The Last Dance received.) And that fits in with the other moves NBC has made to try and share resources across their RSNs and provide some cross-RSN content. We’ll see how the overall series turns out and how much attention it winds up drawing, but “I’m Back” looks like a pretty good start.