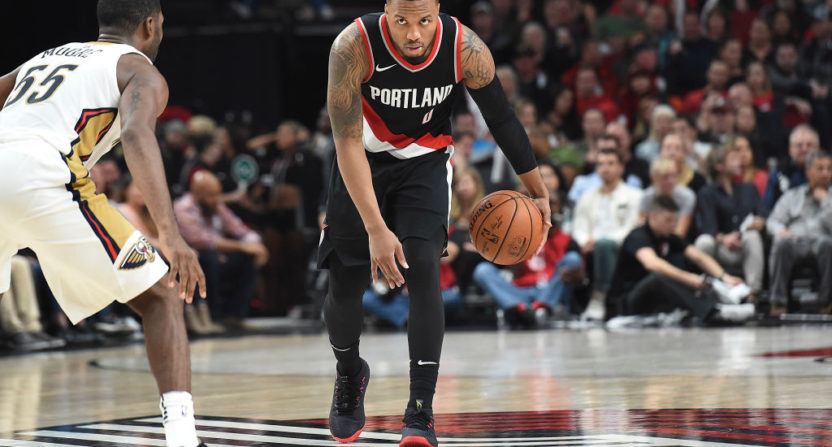 Portland Trail Blazers’ fans who aren’t able to regularly watch the team play on NBC Sports Northwest will now have a new option to take in some game. As per Joe Freeman of The Oregonian, NBC will offer a standalone over-the-top package where fans can stream 15 pre-selected Blazers’ games for $34.99.

While NBC Sports has previously dove into streaming packages on a national level for Premier League soccer, track and field, rugby, and cycling, this is believed to be the first time they’ve done this with one of their regional networks and a particular team. Here are more details from Freeman:

The product, to be dubbed, “Blazers Pass,” will include 15 preselected Blazers games and cost $34.99 — less than $2.50 a game. It will be available for purchase immediately.

The first game in the package will feature a Dec. 11 road matchup at the Golden State Warriors and the last will be an April 9 outing at the Denver Nuggets. In between, Blazers opponents such as Houston, Los Angeles, Boston, Utah, Memphis and San Antonio will be included in the offerings. Thirteen of the 15 games will come after Jan. 1 and 11 will come against Western Conference foes.

The 15 games, combined with the 11 times the Blazers will play on ESPN and TNT, means Blazers fans who don’t subscribe to Comcast and other cable and streaming partners will have the opportunity to watch 26 of the Blazers’ 82 games this season.

NBC has officially announced this as well:

So, there are 15 games now available to those who live in Blazers’ territory who don’t have pay TV at all, and 26 now available to those who have cable or satellite but don’t have NBC Sports Northwest. That’s a significant number, as Dish and DirecTV don’t carry the channel, and some other providers only carry it in higher tiers. Of course, fans elsewhere could access all Blazers’ games through the NBA League Pass streaming service, but local blackouts mean that isn’t usually a good option for those inside the team’s territory.

When the Blazers’ TV deal came up last summer, there were plenty of reports that they would part ways with the then-Comcast Sports Northwest (now NBC Sports Northwest, which has carried their games since the 2007-08 season) in favor of Root Sports Northwest and its more robust carriage, but they wound up signing a four-year extension with Comcast and said at the time there would be some streaming options.

Now, one is showing up, and this seems like an approach that NBC could potentially repeat with some of their other regional networks if it goes well. We’ll see how it works out, but there’s definitely some potential here. And Blazers’ fans previously blocked out from local games now have an option to legally watch at least some of them.