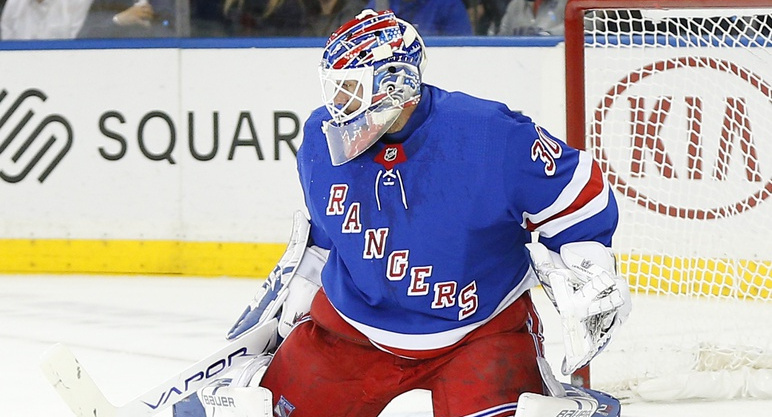 It’s always interesting when a local network really leans into a long-running content idea around one of the teams they cover, and that’s what MSG Networks is doing ahead of the New York Rangers’ retirement of famed goalie Henrik Lundqvist‘s jersey ahead of their home game on January 28. Lundqvist (seen above during a Feb. 2020 game) spent all 15 of his played NHL seasons with the Rangers from 2005-20 (he did sign with the Washington Capitals in October 2020 after the Rangers bought out the last year of his contract, but never played with them thanks to heart issues), and was one of the league’s top goalies for much of that time (his 459 career wins are sixth-most in NHL history), so he’s certainly a fitting figure for the team to honor.

And MSG is doing some notable things there as well. The network announced Wednesday that they’d roll out a “30 Days of 30” programming initiative around Lundqvist (now a studio analyst for them for selected Rangers games) ahead of that retirement. That will include a new one-on-one interview special with Lundqvist on Jan. 28 ahead of the jersey retirement, with his former teammate Steve Valiquette (also a MSG Rangers analyst) hosting that. Here’s more from a release:

MSG Networks today announced a month-long lineup of special programming, “30 Days of 30, presented by Caesars Sportsbook,” to celebrate former Rangers goalie and franchise icon Henrik Lundqvist. The multi-platform campaign will begin today, Wednesday, December 29th across MSG Networks’ linear, digital and social channels. The coverage will continue for 30 days and nights, culminating on the night of Friday, January 28th when the Rangers will be retiring Lundqvist’s number 30 into the rafters at Madison Square Garden prior to the team’s game versus Minnesota.

…As part of the commemorative coverage on the night of the jersey retirement, MSG Networks will premiere “Henrik Lundqvist the Journey, Presented by Chase,” a new, one-on-one interview special with Lundqvist, hosted by his former teammate and Rangers analyst Steve Valiquette. During the candid, sitdown conversation, Lundqvist will give an in-depth look back at his storied career, while sharing some of his favorite memories from his time with the Rangers. The interview will air at 5:30pm ET on Friday, January 28th , prior to the network’s pregame ceremony coverage getting underway at 6:00pm ET that night.

Some of the additional coverage highlights during the month-long campaign will include:

• 30 Nights of Games – late night re-airs of some of the best games from Lundqvist’s career with the Rangers, including his first NHL win in 2005, iconic playoff moments and more

• Congrats to the King – series of vignettes featuring a mix of Rangers greats (Mike Richter, Mike Keenan) former teammates (Mats Zuccarello, Marc Staal, etc.) and opponents from around the league (Sidney Crosby, Alex Ovechkin, etc.) sharing their thoughts on Lundqvist’s career and his impact on them, which will air each day across the network’s digital and social platforms and be integrated into its live games at night

• Henrik in Primetime – select nightly programming blocks consisting of past episodes of shows that have aired on the network profiling the life and career of Lundqvist, such as “Beginnings,” “Connections” and the interview series “The Mask with Henrik Lundqvist”

This is an ambitious approach from MSG, and that’s a lot of content to do on one athlete. However, the way they’re doing this seems like it has some consideration for providing value for those who do care about this while not getting too much in the way of those who aren’t interested. For example, the late-night game re-airs are a good way to use that block of often-lightly-viewed programming, especially in a DVR age; those interested in many of those games, or even particular ones of those games, can record them to watch at their leisure, and it’s not much of a loss to anyone else.

The “Congrats to the King” segments are also smart. Those will get some social play, and they make some sense on the network as well (especially during live Rangers’ games), but that’s less intrusive than a daily scheduled show. And the “Henrik in Primetime” selected programming blocks are also smart; they’re not just airing everything he’s ever done with MSG, but rather some notable parts of their past content library with him, and they’re likely doing that at times when it won’t really get in the way of other things. So this looks like a logical play all around; it’s a notable and long-running salute to Lundqvist, but in a way that seems to add value without taking much away from other content they might offer.