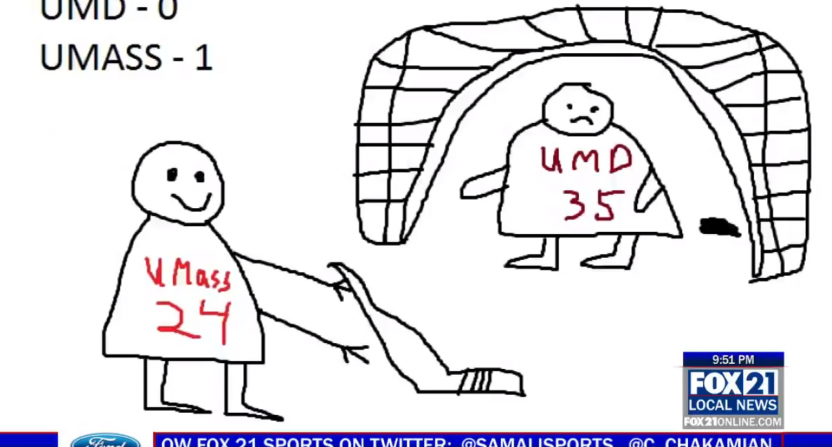 In men’s Frozen Four action last night, UMass took down Minnesota-Duluth 3-2 in overtime to advance to the national championship.

That’s an especially noteworthy event for the folks in Duluth; Minnesotans take their hockey seriously, dontcha know. That meant it was a top story on local news, as you’d expect. Unfortunately for some affiliates, exclusive rights meant highlights weren’t allowed.

Clearly that’s a limiting factor for a local newscast, but WQDS Fox 21 sports anchor Sam Ali took matters into his own hands. And then used those hands to create some hockey stick figure drawings to bring the action to the hometown audience.

So as some of you know, we're not allowed to show highlights of games on ESPN. So with the UMD-UMass game only in the second intermission, I had to improvise with the "highlights": pic.twitter.com/BnXnNwaAU9

Watching it a few times, a few little things stand out. First, throwing it to an arena establishing shot that’s just an MS Paint doodled hockey rink is an A+. That it follows the very familiar rhythms of a local news highlight package is great, too, as is the fact that Ali worked in “light the lamp” over a still drawing. (The facial expressions, too, very good touch.)

The best part of the entire thing, though: Ali cracking up partway through at the inherent and intended absurdity. Hearing people have fun doing their jobs is, unsurprisingly, very fun for viewers, too!