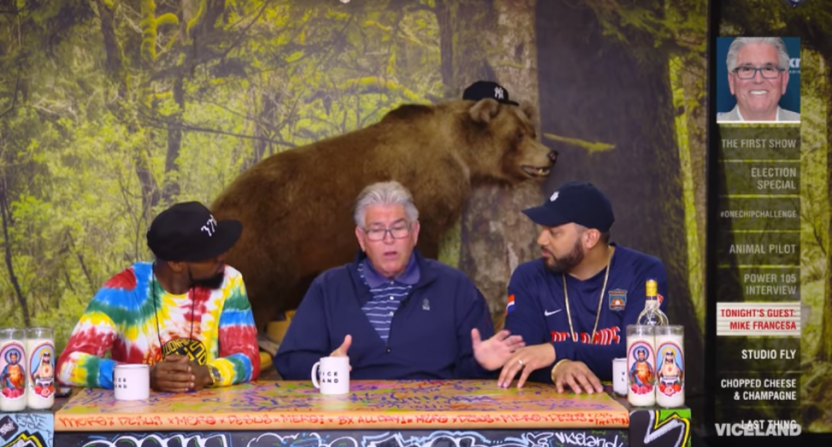 Viceland late-night hosts and occasional ESPN contributors Desus Nice (Daniel Baker) and The Kid Mero (Joel Martinez) are leaving the channel for a weekly show on Showtime that’s set to start next year, and they aired their 293rd and final episode of Desus & Mero Thursday. Appropriately for a show by two New Yorkers that thoroughly embraces that city (they were even named in Timeout’s New Yorkers of the Year feature last year) they brought on some New York sports royalty for the final episode; the Sports Pope and once-and-future WFAN king himself, Mike Francesa.Francesa was featured both in a five-minute conversation that aired and in a 26-minute extended cut. Here’s the full show that aired, with the five-minute Francesa segment starting at about 13:30:Here’s the extended cut of his interview:There’s a lot covered in there, from Francesa’s return to radio and how he missed it to the Yankees-Red Sox rivalry and brawl to the Knicks’ struggles to how Francesa handles ridiculous callers (“How do you stay professional?” “I don’t, I hang up on them! Or I say ‘Why did I have to be your one call?’ Whether they were in jail or in some nuthouse, why’d I have to be their one call?”) , but the two most notable from a sports media standpoint are likely Francesa’s comments on Twitter and his comments on being unabashedly New York-centric.

The Twitter comments come around 15:00 of the full show, where they discuss Francesa joining Twitter in May and his first tweet, “Long time coming, first time tweeting. Don’t waste my time with dumb stuff.” Desus asks “Are people wasting your time with dumb stuff?” and Francesa says “I don’t read the comments, I don’t know.” So Twitter is very much a one-way street for Francesa. Which isn’t surprising, considering that he’s tweeted 232 times as of Friday afternoon and has only ever mentioned anyone else’s handle once (and that was for a photo with another Viceland host, Action Bronson), but it’s good to have confirmation. So you will not reach Mike on da Twitter, guys.And around 16:20, Mero asks “Being a New York guy, when we came on the scene, it was like ‘Oh, they’re too New York. They’re too New York-centric.’ As a guy who has a very distinct New York accent, how did you overcome that?” Francesa responds “Oh, I tell you, it was an issue. But here’s the deal, though; I did network television for 13 years for CBS, you know, NCAA tournament, basketball, football, all that stuff. Around the country, they’d write ‘Oh, this guy’s too New York’ and all that stuff. But I never paid attention. If they don’t like it, tough! I’d rather own New York than own the whole country.”That’s definitely been Francesa’s approach, and while it’s perhaps hurt him in some respects (national simulcasts of his show on FS1 definitely didn’t work for a variety of reasons, including Champions League preemption but also including the complete focus on New York sports, and he didn’t seem to pull in a whole lot of serious national offers after leaving WFAN), it’s certainly helped him dominate New York. He’s once again leading the ratings, and doing so by a significant amount. And while he reportedly took a pay cut to come back to WFAN and do a shorter, later show, it seems to be working out for him so far. It was interesting to see this interview with Desus and Mero, and to see these different generations of New Yorkers connect. And it suggests that Francesa’s still pretty important in that city, even to a lot of much younger talents.[Desus & Mero on YouTube]