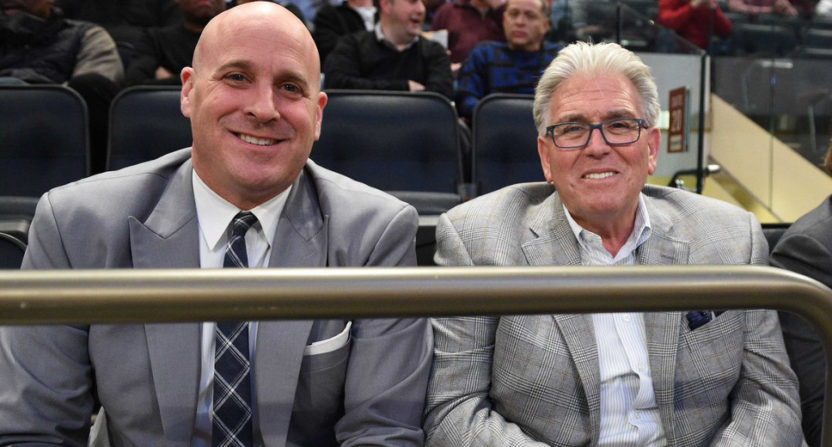 There’s been plenty of discussion of what’s next for Mike Francesa following his December exit from WFAN, and it appears those discussions are going to continue. Andrew Marchand has an article discussing Francesa’s future plans in The New York Post, complete with a fiesty interview where Francesa says “You should write, ‘You, Andrew Marchand, don’t know what I’m planning.'”

However, it appears that Marchand knows at least part of what Francesa is planning; he mentions that Francesa is building a studio in his house and is working with the CAA agency, and while Francesa told Marchand he hadn’t signed with anyone (but didn’t answer if he was working with CAA), Neil Best of Newsday noted Francesa sitting with CAA’s Mike Levine at the Big East Tournament at Madison Square Garden Thursday:

Hey, isn't that Mike Francesa watching the Big East Tournament with CAA Sports co-head Mike Levine? Why yes, it is! Looks like Big Mike is closing in on his post-WFAN agency representation. pic.twitter.com/yY2rif1BnW

The CAA connection is intriguing, as they certainly have plenty of pull in the sports world. And it also maybe adds something to another item Marchand mentions: discussions with The Athletic:

Francesa has spoken to the subscriber-based, two-year-old startup The Athletic, according to sources. The Athletic is predominantly based in the written word and not in Francesa’s audio background.

The site did just raise an additional $20 million, which included money from CAA, a top talent agency. Francesa, according to a source, is working with CAA. Francesa said he hadn’t signed with anyone, but declined to say he wasn’t working with anyone. A CAA spokesperson declined comment.

While a source said there is no current match with The Athletic, the CAA relationship probably will lead to whatever is next for Francesa. It also a sign that Francesa, who hasn’t had an agent for years, realizes he now needs some help in figuring out his future.

The Athletic has mentioned some potential additional focus on podcasts in the past, but Francesa would still seem like an odd fit there. However, they do have plenty of money, and something with Francesa might help their recently-launched New York vertical gain some traction given Francesa’s popularity in that city. And it’s also notable that there don’t appear too many other big outlets really interested in Francesa. Marchand mentions that ESPN isn’t a fit, and neither is Turner, while regional networks like MSG, SNY, and YES don’t seem too probable at this point either.

While not discussed in the article, Francesa almost certainly isn’t going back to FS1, given how that didn’t really work for anyone, and CBSSN and NBCSN don’t seem like fits either.

Marchand does include some discussions of Sirius XM, perhaps even in partnership with Francesa’s former WFAN co-host Chris “Mad Dog” Russo (which could also include Russo’s MLB Network show), but Russo’s doing well on his own, and it’s unclear if there’s the money to motivate a regular reunion. (A short once-a-week or once-every-two-weeks crossover, which Francesa has discussed before, could maybe happen, but a full-time reunion seems unlikely.) And while there are plenty of tech and streaming firms looking to up their sports presence, Francesa’s mostly old-school approach might not be the best fit there either.

Francesa has been a guest on NFL Network recently, and maybe there’s something there, but it’s unclear if something so focused on one sport would work for him. So, the takeaway is that we all really don’t know where Francesa will land. But, as per Marchand’s report, the man himself might not know that at this point.