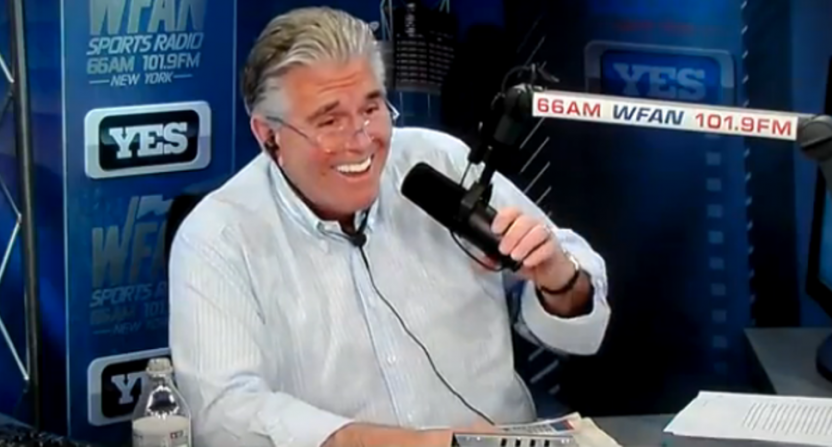 Mike Francesa’s return to WFAN less than five months after he left following a 23-month goodbye tour sparked plenty of derision from critics, but it looks like it’s working out from an audience standpoint. As per Neil Best of Newsday, Francesa’s first month back saw him again placing first in the ratings and beating out ESPN New York’s Michael Kay:

Mike Francesa ranked first — or, in other words, “Numbah One” — for his first month back on WFAN, finishing May with an average 6.8 percent share of the audience among men ages 25-54 from 3 to 6:30 p.m., the hours during which he is head-to-head against ESPN New York Radio’s Michael Kay.

According to data from Nielsen Audio released on Monday, Kay ranked fourth with a 5.5 share for the period April 26 to May 23.

Those figures were similar to what they were when the two last went head-to-head. In the autumn book last year, Francesa beat Kay, 6.6 to 5.0, before leaving the station on Dec. 15.

There are a few caveats there; for one, Francesa didn’t start until May 1, so that first week in the book was still his predecessors of Chris Carlin, Maggie Gray and Bart Scott (CMB), who have moved to an earlier, shorter show after Francesa’s return. But if anything, that probably drags these numbers down; in the April book, the CMB show tied Kay with a 4.4 share in that demographic. So Francesa coming back appears to have given WFAN a significant ratings boost. (And it’s hurt Kay; with Francesa out of the picture, ESPN jubilantly proclaimed in April that “The Michael Kay Show on ESPN New York 98.7FM led New York sports talk shows in the winter ratings book.” Kay’s show is still doing well overall, and is second in the sports category, but it seems like his days of leading the book may no longer be the case following the return of the Mike.)

It’s only one month, and there of course could be an extra initial boost from those tuning in to Francesa’s first show or first week but not sticking around after that, but these numbers make this move seem like it’s going okay for the radio station. And that may help take some of the sting out of the awkwardness of working with Francesa again. There have been some potential challenges there, especially after Francesa reportedly went over the head of WFAN vice president of programming Mark Chernoff to (parent company) Entercom president David Field to get his job back. But Chernoff’s publicly said he’s happy to have Francesa return (possibly helped by the reported pay cut Francesa is taking compared to what he made in his last WFAN stint), and good ratings have a tendency to help make things run a little smotther.

It’s interesting that so many listeners have returned to Francesa even after the awkward goodbye tour/exit/vague big plans/eventual return. The jump over CMB’s April numbers suggest there are still plenty of people who prefer Francesa, and plenty who will tune in if he’s on. Will that hold up for the long run? We’ll have to see. But the early indications have this working out for Francesa and WFAN, at least in the ratings.