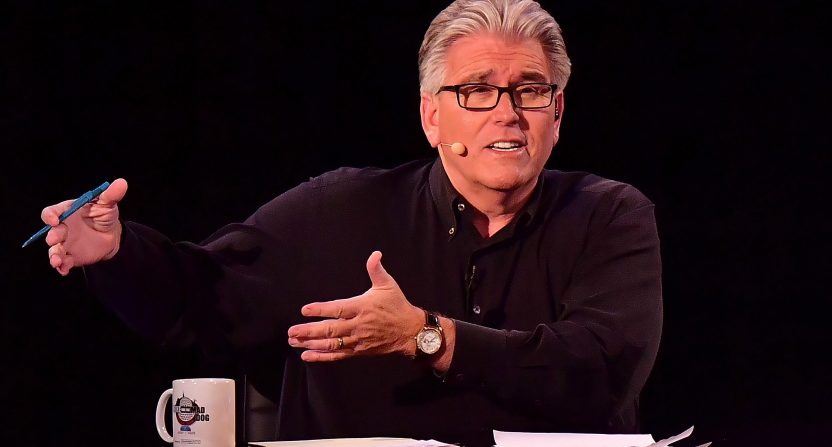 The ongoing drama revolving around New York sports talk radio personality Mike Francesa is certainly ramping up once again. The Sports Pope has only recently come back from retirement to take back his old job at WFAN in New York, but he has also tried to make a move to modernity with a multi-platform outreach. Specifically, Francesa finally joined Twitter and launched an app where fans could listen to him at all hours of the day for the low, low price of $8.99 per month.

Earlier this month the Mike’s On app has been the subject of mockery by Francesa’s own WFAN colleagues after he no-showed (showing the relationships at the station haven’t exactly thawed since his controversial return). This week, Francesa openly opined that he may leave WFAN just months into his return to focus on the app in spite of conjecture to the contrary. And on Wednesday, we learned the extent of how focused Francesa is on his app.

You don’t mess with a man and his app.

In response to Francesa’s initial comments, New York Post media reporter Andrew Marchand penned a column about the host’s cloudy future. Marchand’s view is that Francesa would slide into irrelevance if he were to disappear from WFAN airwaves and move behind a paywall, one that has an unknown number of subscribers and is built largely around a video feed of Francesa’s already free radio show.

But, if he is serious about giving up his WFAN radio show to just do his app, he would basically take himself into irrelevance, just like the last “retirement.” Even if the app is successful — and not offering basically the exact same product for free nearly 18 hours a week would help — Francesa would be behind a paywall, which would quiet his voice.

Who knows what Francesa wants? Apparently, not him. He has retired, unretired and now is threatening to do who knows what. His best content is about him, his flip-flopping and his ridiculousness. You don’t tune in for the handicapping.

It may well just be a negotiating ploy to extract more money from Entercom after agreeing to a pay cut for his May return, but apparently not signing a contract. He may be saying he won’t quit the app to try to give himself more leverage. Really, Francesa might not know what he is thinking, so it is hard for anyone else to fully figure it out.

Obviously it’s the mysterious number of Mike’s On subscribers that is the real question here. If there’s an actual business that can be sustainable there with a real subscriber base, maybe Francesa will walk away from WFAN (again). If not, then perhaps Marchand is right that it’s a public posturing ploy. We don’t have any public numbers about the app, but this informal poll from Marchand suggests it may not be one of the most popular downloads in the Apple Store.

How many people do you know who have the Mike's On app?

After all this, Francesa launched into an astonishing attack against Marchand on his radio show with this rant defending his app. Apparently it all comes down to Francesa thinking Marchand reported the app only had 300 subscribers during a September Sports Illustrated podcast appearance with Jimmy Traina. During that appearance Marchand joked in an off-handed way that Francesa wouldn’t theoretically be able to get guests with only 300 subscribers for the app. It wasn’t an actual report.

In spite of that, clearly Francesa took even the mention of it very personally. Just how personally? In addition to insulting Marchand on his radio show, Francesa said he would bet Marchand $10,000 in cash for every subscriber over or under 800 subscribers. He repeatedly said Marchand could make $5 million if Francesa really had just 300 subscribers. (H/T TBL)

Given the vigor of Francesa’s response, you would think that Marchand had reported that Diet Coke was bad for your health or something.

Big Mike making fun of what Andrew Marchand may or may not earn salary-wise as a reporter. The bully strikes again. Actually, Andrew's goal is to be friends with Jim Dolan like you are Mike.

Somehow this gets even crazier from here. Marchand went to Twitter to say he offered Francesa an opportunity to speak in an interview about the app to clear up what’s really happening with it. Unbelievably, he said Francesa demanded $500,000 to do so (!!!!), which would be one of the most absurd things in the absurd history of sports talk radio.

Update: I called Mark Chernoff to set up an interview with Mike Francesa about his app. Mike apparently wants $500,000 in escrow to do it. He recommended I deal directly with Mike. I have left Mike a message.

Francesa responded by again bringing up the 300 subscribers remark and called Marchand a “fraud” and “liar” in all caps.

Marchand threw out the interview invite once again and also made it clear that no money was going to change hands.

I left you a voicemail to come down to the station tomorrow. Chernoff told me you wanted $500K in escrow to do an interview. We don't pay for interviews, but I'd love to help clear up how the app is doing. Let's set it up. Call me back. Thanks. https://t.co/pJ9kA7oOvQ

So there you have it. A month old joke about how few people may or may not have paid $8.99 a month for Mike Francesa’s app turned into a $5 million bet made live on the air. Really it was just another Wednesday.