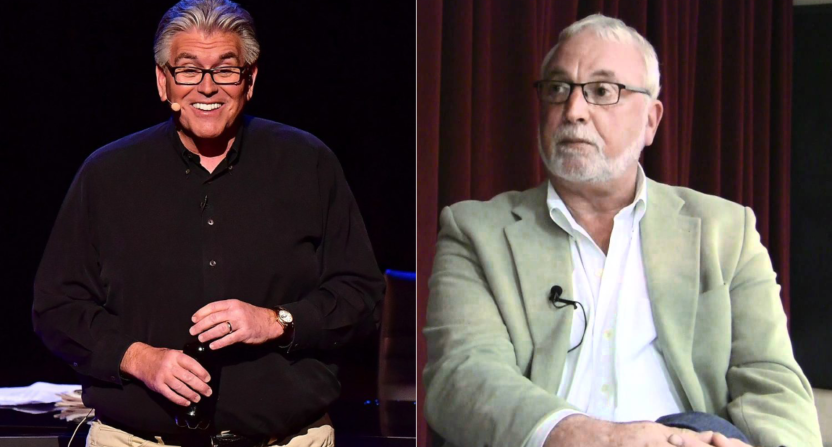 The Mike Francesa – Phil Mushnick feud is one of the weirdest, longest-running, and most high-profile local fights out there, and it’s not dying down any time soon even with Francesa’s forthcoming end-of-the-year exit from New York’s WFAN. Long-time New York Post columnist (and frequent This Week In Hot Takes denizen) Mushnick (seen at right above) has gone at Francesa (seen at left above) over all sorts of things over the years, including alleged tapes of him and Chris “Mad Dog” Russo demanding loyalty oaths from Jews after 9/11 (Deadspin recently tracked down one from September 12, 2001, which didn’t have some of the specifics Mushnick listed, but Mushnick says in that story those comments came on later tapes), but his latest swing came as a note partway through Sunday’s column on the Yankees’ quiet stadium, where he not only relayed a story about Francesa fighting with his boss, but brought up those tapes again:

Seems Mike Francesa isn’t made of the stuff that would allow him to bow out graciously or gracefully. Last week, as per reliable sources, another in-house screaming match, this one with WFAN boss Mark Chernoff, whom Francesa apparently blamed for losing a head-to-head ratings period to Michael Kay’s ESPN-NY radio show. Chernoff, we’re told, shouted back.

But how can we expect Francesa, such a bad winner, to be a good loser?

And to think Chernoff helped “lose” those post-9/11 tapes in which Francesa parlayed the Islamic terrorist attacks to conclude that the loyalty of American Jews should be questioned. For that cover-up, Francesa should always be indebted to Chernoff.

Francesa is on vacation this week, but sent a statement to his producer Brian Monzo, who sent it out over several tweets Tuesday. Sports Funhouse collected it here:

Francesa is on vacation, but he has issued a vehement denial about Phil Mushnick's ratings story yesterday. (Via his producer, @BMonzoWFAN) pic.twitter.com/UhAev1ODlK

That is quite the fiery statement, especially when it comes to “the other wild lies and crazy accusations” (presumably the post-9/11 tapes allegations). Francesa isn’t quite right that they were “already dispelled,” as no one’s ever been able to find proof one way or the other, and Deadspin’s piece on the Sept. 12 tape could be evidence for either side; it had Francesa and Russo saying some problematic things, but not specifically what Mushnick attributed to them. But he is correct that he’s a regular presence in Mushnick’s columns, and usually not in a good way.

(Bizarrely, Mushnick wrote a column last week defending Francesa from criticism for his use of “Orientals.” In there, Mushnick said that word was “merely…a term that has been deemed passé,” but then went on to complain about Nicki Minaj and Drake’s lyrics. But the vast majority of Mushnick’s mentions of Francesa have been much more negative.)

In any case, perhaps the most interesting part here is that Francesa not only weighed in on a Mushnick column, but did so from vacation. He usually just lets these shots slide. But perhaps he felt compelled to given Mushnick’s specific allegation about Francesa fighting with Chernoff? Regardless of the motivation, it’s now going to be worth watching if Mushnick lets this go, or if he decides to shoot back again. The chances of the Francesa-Mushnick war heating up further seem pretty decent.