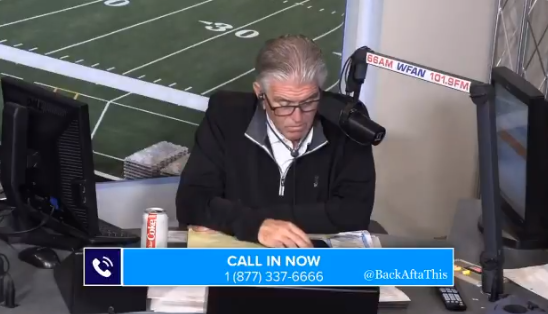 Mike Francesa got a call Tuesday on his WFAN radio show from a listener that was looking for solutions on NFL tanking. The caller went on for nearly a minute on ways to possibly prevent tanking, while Francesa looked at his phone and didn’t seem to be listening.

And Francesa’s response confirmed he wasn’t listening. The radio host “answered” the caller’s question by talking about… pass interference in the NFL, which is definitely in no way related to NFL teams tanking.

This might be my new favorite Mike Francesa clip. ????

• Caller asks a 58-second question about tanking in the NFL.
• Mike completely ignores the guy as he plays with his phone.
• Mike's answer has absolutely NOTHING to do with the question. pic.twitter.com/j40bkrO3fW

“I was thinking about this for the NFL, and also it could be a solution in the NBA too. Have they ever discussed… to prevent teams from tanking… doing a reversal. So, like, the best teams that don’t make the playoffs… so if you’re 8-8 or 9-7 and you just miss out… because of whatever tiebreaker. Those teams get the No. 1 pick, and they go backwards. I know that we don’t see tanking all the time, but you see cases like the front office of what Houston did years ago, what the Knicks did last year, the Celtics, the Sixers, and now what we’re seeing with the Dolphins. So is there any way they can incentivize these teams to say, ‘Look, you’re 8-8, you’re 7-9, but you know what? You missed out by… whatever… a tiebreaker.’ Could they ever do that? And does it make sense?”

“Um… I don’t think there’s an easy remedy. It’s a very tricky situation. They have to have a mechanism in place in the big game to overturn the blatant mistake… like happened in the New Orleans game. Now that play, there is not a doubt in the world that you would call a penalty on that play. A penalty would be called on that play 98 out of 100 times, maybe 99 out of 100 times. And we got the one time. I mean, that’s what we wound up with. And they needed to fix it. But they really haven’t fixed it, because they have got a system forced on them that they don’t want, and they have not fixed it, in any way. They really haven’t. Back after this.”

Now, the caller was all over the place with the tanking thoughts, but anyone listening should at least be able to easily gather that he’s talking about tanking and *not* pass interference (or any NFL penalties).

Full disclosure. The caller immediately before this guy asked Mike about the horrible new system for challenging pass interference. So after Mike ignored this new caller, and it was time to answer, he must have assumed/hoped/prayed that it was still the topic. Hilarious.

That’s of course a problem that can be avoided by simply listening to your callers. At least Francesa didn’t fall asleep this time.