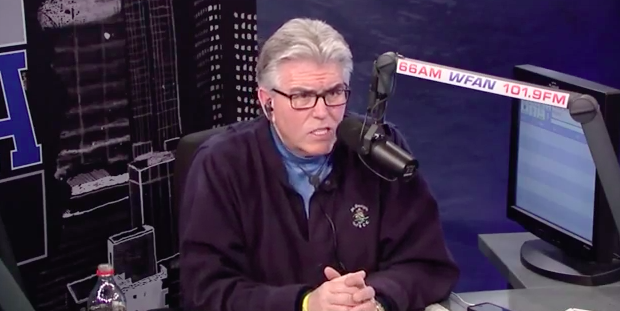 The relationship between WFAN morning hosts Gregg Giannotti and Boomer Esiason and afternoon host Mike Francesa has been fraught ever since the latter returned to the station earlier this year (and honestly, long before that as well). After launching his own app for the low, low price of $8.99/month, Francesa was mocked by his WFAN colleagues after no-showing an appearance. When not being very defensive about said app, Francesa hasn’t been shy about speaking out against his fellow employees.

That also includes throwing coworker Maggie Gray under the bus to defend reviled Knicks owner James Dolan. When he’s not complaining about his WFAN compatriots, he’s probably trying to figure out who the hell Dino Babers is, yelling about Tim Tebow, or saying he may leave WFAN just months into his return to focus on his app.

As far as his relationship with the morning crew, it seemed like a logical move for Francesa to just not listen or engage. However, Mike found himself on a long drive out of Manhattan to LaGuardia on Wednesday when he “made the mistake” of listening to WFAN’s morning show for an hour, “which was hard to do.” From there, Francesa used his own timeslot to bash his own network’s morning programming, which he thinks “stinks.”

So yeah: Francesa on what he heard on the radio on a drive to the airport and bad impersonations of him: https://t.co/rTMfZvC5Wg

Francesa’s chief complaint was that they spent way too much time talking about a proposed fight between WFAN midday host Bart Scott and CBS Sports Radio host Pete “Taz” Senerchia (whom Mike says he doesn’t think he’s ever met before being corrected that he has, in fact, met). He then referenced “those two morons [Giannotti and Carlin] rolling around in the street out in front of the station,” adding, “I guess fighting over ratings or something out in the middle of the street punching each other to death, that you could have shown me a video of. I would have looked at that.”

Mike also had some thoughts on Giannotti’s impression of him, saying, “I mean, enough already. God, get some new material, please. No wonder your show stinks.”

“Geez, Giannotti, I mean, he is short on ability. I’m sorry,” said Francesa. “I’m sick of the impersonations. I listened to them this morning. They stink . . . play that tape tomorrow morning.”

Newsday reached out to Esiason for comment. Via email, he responded by saying, “I’m glad he listens as we listen to him! Never a dull day at the FAN! Fun stuff and good material.” The email was punctuated with three laughing emojis, which is sure to confuse the hell out of Francesa when he finds out about it.

Should be a fun day in the WFAN lunchroom on Thursday.