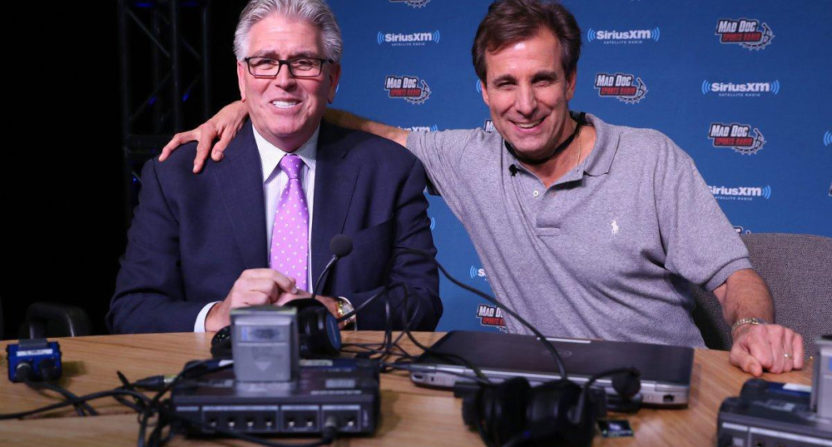 There are significant stakes at play in the New York radio ratings book battles this quarter, as January saw ESPN New York’s Michael Kay beat WFAN’s Mike Francesa for the second month in a row, but only for only the third month ever. With a lot of speculation out there about Francesa’s long-term future at the station and a much-delayed statement from him this weekend, a full-quarter loss to Kay could provide yet more ammunition for Francesa critics, and for those arguing that WFAN should make a change (whether that’s bringing in a co-host for Francesa’s show or moving on from him altogether). Meanwhile, a full-quarter win for Kay would be the first ever for him, and would provide further momentum for his show. It sounds like the results are going to be close, so that has both sides pulling out all the stops.

Wednesday marks the last day of the quarter’s ratings book, and both Francesa and Kay are going all-out in an attempt to attract listeners. Francesa (seen at left above) is giving away a ticket to watch a Yankees game with him, and he’s also bringing in The Ringer’s Bill Simmons (a previous co-host and guest, and someone who’s also often had Francesa on his own podcast) for an hour. But Kay may have found an even better ratings stunt: bringing in Francesa’s former partner, Chris “Mad Dog” Russo (seen at right above).

Tomorrow on @TMKSESPN @TMKSonYES we will have @MadDogUnleashed and @teixeiramark25 as guests. Yes, Mad Dog will join us. Lot to ask him.

Francesa and Russo were paired as “Mike and the Mad Dog” on WFAN in the afternoon from 1989 to 2008, and their partnership was so prominent that it even spawned a 30 for 30. And it’s fascinating to see Russo now helping out Francesa’s rival, as the ice between them looked like it was falling in recent years; they reunited at Francesacon (yes, that is somehow a thing) in March 2016, said they were open to a possible reunion around the 30 for 30 premiere in April 2017, reunited again for a town hall broadcast at SiriusXM’s studios that July, and said there that they’d reunite regularly if “given the right forum and price.” And Russo’s SiriusXM channel was even floated as a destination for Francesa at one point following Francesa’s retirement from WFAN in December 2017. But when Francesa came back in April 2018, Russo was one of the many to criticize him, going in on Francesa in strong terms:

“When you retire, just retire. You finish, you say goodbye on a Friday afternoon, give the callers a chance, and move on. You can’t do a long goodbye, because if you do a long goodbye, it gets a little tedious, number one, and number two, if you change your mind in five or six months, you look like a horse’s fanny. When it’s time to go, just sense in your own gut and go.”

“Make sure that when you do retire, you’ve got something to do every day. Now, Mike’s got young kids (13-year-old boy and girl twins and an 11-year-old son), so it’s much harder. You can’t go to Miami or West Palm Beach or the Kentucky Derby because you’ve got to deal with young kids in school!…You don’t want to be home with kids! That’s why the wife, that’s why the missus is there! Let Jeanne Russo take the kids to school, let her worry about Colin’s headache, let her worry about Kira’s SAT scores, let me go to work and do a talk show every day, and I’ll see you at 7:30!”

So maybe there’s been a falling-out since then. At any rate, it’s quite funny that Russo will again be part of the New York radio ratings wars, but helping Kay rather than Francesa.