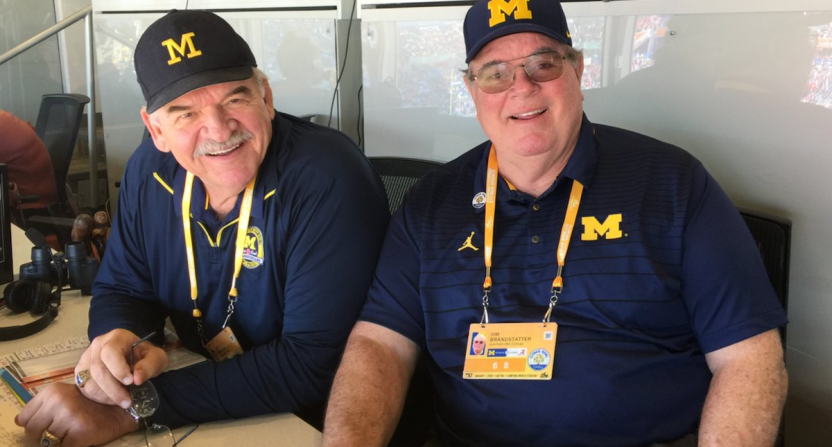 The University of Michigan kicked off its 2021 football campaign with a 47-14 over Western Michigan on Saturday afternoon. But before kickoff, listeners to the Michigan radio broadcast were informed that an era would be ending.

Broadcasters Jim Brandstatter and Dan Dierdorf announced that they will both retire following the season. The duo has called Michigan games together for the past seven seasons with Brandstatter on play-by-play and Dierdorf providing analysis.

Brandstatter, 72, a Michigan offensive lineman from 1969 to 1972, has been in the Michigan broadcast booth since 1979. He was previously the analyst on Michigan radio broadcasts until 2014 when play-by-play announcer Frank Beckmann retired. Brandstatter switched to play-by-play when Dierdorf joined the booth.

You can listen to Brandstatter’s opening to Saturday’s broadcast below (via Audacy):

“Before we get started, there’s a quick announcement I want all of you to listen to,” said Brandstatter. “For Dan Dierdorf and I, this will be our last season broadcasting Michigan football. As Crash Davis said at the end of Bull Durham, ‘We’re hangin’ ’em up.’

“And that being said, two words come to mind for me: Thank you. And those two words are completely inadequate in expressing my sentiments to all of you who have been so supportive — for over 40 years, in my case. You’ve invited me into your homes on the radio for Michigan football, and television for Michigan Replay and Inside Michigan Football. Without you and your support, I don’t have the job of my dreams and I am eternally grateful.”

Dierdorf, 73, began calling Michigan games after leaving CBS following the 2013 season. Many fans surely know him from his 12 seasons in ABC’s Monday Night Football booth with Al Michaels and Frank Gifford from 1987 to 1999. (Boomer Esiason replaced Gifford for the 1998 and 1999 seasons.) Dierdorf moved to CBS, where he called broadcasts for another 14 seasons, first with Verne Lundquist, then Dick Enberg, and finally Greg Gumbel.

As a player, Dierdorf earned induction into the College Football and Pro Football Halls of Fame. But he also earned Hall of Fame honors as a broadcaster, receiving the Pete Rozelle Radio-Television Award in 2008.

Joining the football program’s broadcast booth was a homecoming for Dierdorf, who played in Ann Arbor from 1967 through 1970, earning All-Big Ten and All-American honors during his college career. He told the Detroit News‘ Angelique Chengelis that the opportunity to call Michigan games with Brandstatter was an opportunity that couldn’t be refused, and initially agreed to be in the booth for three seasons.

Related: That Dan Dierdorf retirement did not last long

The two former Wolverines lineman said from the outset that they would make the decision to retire together and began to discuss working their final season at the beginning of this year.

“We hope our last year is a resurgence of sorts for Michigan football after last year,” Dierdorf told Chengelis. “We’re both happy. We’re happy because we know in our heart of hearts we made the right call.”