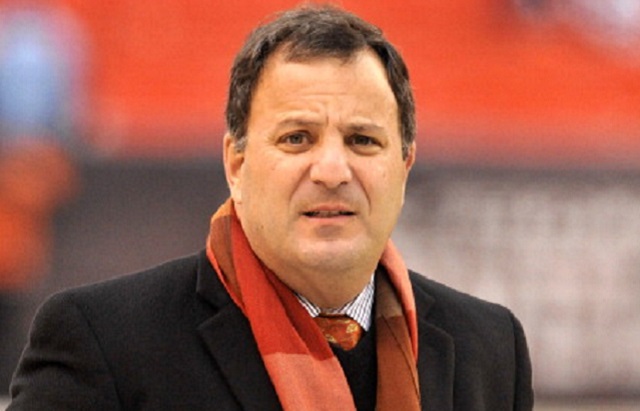 It’s not too hard to find a case of WFAN’s Mike Francesa being publicly wrong about sports, but the latest one’s spawned some interesting chatter. On April 26, Michael Lombardi (the well-traveled ex-NFL executive and current pundit, currently writing for The Athletic and podcasting for Cadence13) wrote an Athletic column after the first round of the NFL draft that had the note “I hear that all is not well in New York Jets land about their scouting operation. General Manager Mike Maccagnan is on the hot seat internally, and many in the league expect changes in the Jets’ front office after the draft. Stay tuned.” near the end. Francesa then went in on Lombardi (seen above during his time with the Browns) as a prelude to an April 29 interview with Maccagnan, one which attracted some extra attention after Maccagnan was fired this week:

April 29 – Mike Francesa asks then-Jets GM Mike Maccagnan about @mlombardiNFL's report that he's on thin ice. Francesa then warns callers that the report is all nonsense, as Lombardi clearly has an agenda. pic.twitter.com/3LK5s0EO4g

“There was this report about you having trouble with your owner, having trouble. Now, Mike Lombardi is known to spread a lot of nonsense and to have an agenda at times, but anything going on that we need to know about?” “No, no. I think we had a long spring and we’re very excited about the free agents we have, and I’ve worked very well with Adam [Gase, the team’s head coach] through this whole process, and I’m excited about working with him going forward.”

With that Francesa soundbite aging poorly, it’s provided some opportunities for others to point that out, and for Lombardi to fire back a bit. And he did so in a guest appearance on ESPN 101.9 Las Vegas’ Cofield and Co. Friday with Steve Cofield:

Cofield starts with “What’s the deal with taking shots at Michael Lombardi? I don’t like that. You know what, let’s talk to Michael Lombardi.” Lombardi then says “I’m doing great, thank you, I appreciate being here. You can’t get any more wrong than Mike Francesa. If Mush from A Bronx Tale was never right, then I think Big Mike, he can make sure Mush looks like a winner.” Cofield says “So what’s going on there, why’s he taking shots at you?” and Lombardi responds “You know, I have no idea, I don’t know why he would want to do that. I don’t spread rumors, I don’t say things, I’m not trying to become the next Adam Schefter. I have a different style that I utilize and believe in. And for Francesa who thinks he has all the answers, I said on my Twitter feed, he’s a genius with an eraser, so he can keep doing it.”

Lombardi then goes on to criticize the Jets and Maccagnan for blaming their problems on their coaching, saying at the end “When that job opened up, everybody in the NFL knew the general manager and the vice-president of personnel were going to have to be somebody you worked around, because their building of the roster wasn’t very good.” And that’s only part of the criticisms he’s had for them this week; he also roasted them in his latest episode of Cadence13’s The GM Shuffle podcast with Adnan Virk, a special edition that was released after Maccagnan’s firing.

“To me, I don’t think this is dysfunctional [for] the Jets, I’m going to be out alone on this one. The Jets had to get this right. And the mistake the Jets made was not firing Maccagnan and Brian Heimerdinger when the season ended. I mean, these two guys were together for four years. They were the responsible builders of the Jets team. And Heimerdinger…as amazing as this is, he had more clout than most anybody could possibly have known. Maccagnan was deferring everything to him. Maccagnan’s a college scout who got promoted to become a GM. How? I don’t know…and so he brought Heimerdinger in, and Heimerdinger for whatever reason… he moved up the NFL as fast as any human being could possibly, with no experience, and he’s making all the decisions. And so it’s really a kind of a dysfunctional front office that’s been this way for years since they got there. But Todd Bowles…he never complained. He just took his medicine, smiled and went to work.”

…”Maccagnan was so listening to the media, you know, he’s gotten all these great reports…[saying] what a great off season he had. You know, h had a great off season last year, but they’ve cut most of those guys. Right. You know, and they would cut Tremaine Johnson, they would cut Tremaine Johnson if they could, but they can’t. Like he’s had a disastrous off season and he continues to do so. The remarkable thing about Maccagnan and Heimerdinger, and I’ve said this before, in their four years prior to this year, they’d never drafted an offensive lineman before the fourth round…when you go to Team Building 101 , the first thing they teach you in Team Building 101 is [to] draft offensive lineman…you’ve got to build the lines. And yet…he didn’t do that. Heimerdinger has always been a scout, and so has Maccagnan. Maccagnan is from a scouting school, that’s what he is. It’s a bigger job than just scouting players—being the GM is building a team, and Maccagnan got that job because Charley Casserly was working for Woody Johnson. Maccagnan worked for Casserly at Houston. He got him that job. I don’t think it was the right fit at the beginning.”

…I think it’ll be somebody Gase can work with. I think it’ll be a partnership, which is what it should have been all along. I mean, this is the only way this model works. The Giants model where Gettleman picks the players and Shurmur coaches them—that model is out the window. That’s old school football. That doesn’t work anymore. You need a partnership between the coach and the general manager. But more than anything, you need a general manager that understands pro personnel, that understands the league, that understands what’s going on. And that ain’t Mike Maccagnan and that really isn’t Brian Heimerdinger. If you look at Heimerdinger…he’s gotten this job [I don’t know] how…I marvel at his ability to move up the ladder this quickly. He’s the son of Mike Heimerdinger, who was one of the nicest human beings of all time, but Brian’s never really been in these jobs. So between the two of them, they really had no experience of how to run a front office and how to be a general manager. Just because you’re an area scout doesn’t mean you could be a GM. You’re an area scout—you don’t understand how to build a team.

So there’s no shortage of criticism for Maccagnan there, and there wasn’t any shortage of it in Lombardi’s previous pieces either. But that criticism is holding up better than Francesa’s argument that Lombardi was just making it all up and spreading rumors.