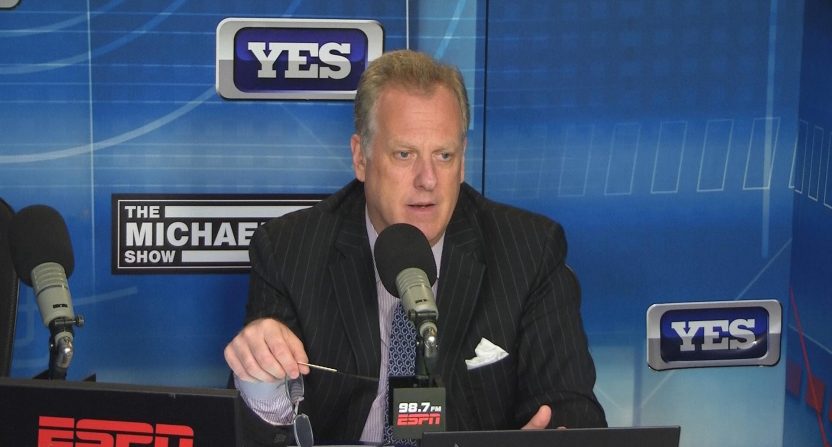 There have been plenty of Mike Francesa follies chronicled here, from his war with FS1 over being preempted for Champions League games through him asking the St. John’s men’s soccer coach dumb questions about the World Cup through “a new report or an old report” to him calling into his station’s morning show to claim he didn’t criticize a Giants’ draft pick for getting shot (he totally did). The WFAN host even committed another one Tuesday, first claiming that his interview with Pete Rose would be Rose’s first one about his new book (for the record, Rose appeared on NBC’s Today and plenty of other shows before that), then moving his interview with Rose up to have it air at the same time as a pre-taped interview with Rose from radio rival Michael Kay of ESPN New York.

And yet, it was Kay who wound up looking like the worst Mike in New York radio Tuesday. Kay first blasted Newsday media critic Neil Best for some pretty dubious reasons. That led to Francesa chronicler Funhouse defending Best, and that in turn led to Kay making a bunch of incredibly bizarre accusations at Funhouse, including that he works for WFAN. (Anyone who’s paid any attention to Funhouse’s account over the years would know there’s absolutely no way that’s the case, as most of the clips he tweets illustrate just how bad Francesa is, and WFAN even got Funhouse’s account suspended at one point.) Kay also claimed he beat Francesa in the last ratings book, which he did not (despite ESPN PR attempts to combine their streaming and linear against WFAN’s linear to make it look otherwise). Here’s some of the lunacy from Kay:

Your understanding? It says on @YESNetwork “recorded earlier.” You’re a regular sleuth, aren’t you Neil. Can’t get a thing past you. https://t.co/EsOZchgryK

Shame on me? Yet you carve out your 15 minutes of fame and relevance by piggy backing on the mistakes of a legendary broadcaster who has done more with his radio career than you could ever do with your career. You destroy him daily and defend him. Good gig. Can’t lose. God bless. https://t.co/SafsdSjjZr

On please, tell your story walking pal. You sit at home gleefully rubbing your hands together because you get to pick out everything an icon does wrong. And I have figured it out just fine. Check the last ratings. And that’s without two sycophants, you and Best, doing publicity. https://t.co/yNYTMA35Bd

Someone who works anonymously doesn’t get the right to claim anything is fugazi. Declare yourself and debate, otherwise you have no legitimacy. You could be working for FAN. Are you? How do we know. https://t.co/N5YXlqcd1k

You know what, Nick, some people have been getting away with nonsense for years and never get called on it. Time to declare. The biggest coward hides behind anonymity and takes shots. I’m out here. Everyone know who says it when I say it. Not the case with the Francesa whisperer. https://t.co/gv1T7jyovO

Could be. Prove you’re not. Kind of odd FAN let’s you use content for nothing. Doesn’t make much sense, does it. And go at finding all my mistakes. I love it. Put my record against yours. I win. Because my name is on it. https://t.co/jsmEMYjHWD

Yes, in the same series of Twitter replies, Kay manages to first say Funhouse is “carv[ing] out your 15 minutes of fame and relevance by piggy backing on the mistakes of a legendary broadcaster” (so, he’s too critical of Francesa) and say “you destroy him daily and defend him” (those two things don’t go together!), then pivot into calling him a “sycophant,” criticize him for being anonymous, and say he “could be working for FAN.” That makes zero sense.

Putting aside that there’s nothing at all to suggest Funhouse works for WFAN (and a whole lot to suggest that he doesn’t, including that he’s been very open about what he does), and putting aside that bashing anonymous critics is so 2012 or 2013, this isn’t even a logically-consistent argument from Kay. Either Funhouse is making it easy to mock Francesa (yes) or he’s secretly promoting him (no). Oh, and this weekend in particular provided a great example of Funhouse not being a Francesa promoter; many called for him to shout out Francesa’s correct golf prediction, and he restated (correctly) that Francesa himself will be all too happy to trumpet that.

But you can bet Kay wasn’t actually paying attention to that, or to anything else about Funhouse’s account. And given his attempt to argue both sides, he may have learned his arguing skills from Monty Python’s argument clinic; he’s providing less of an actual argument, and more just contradiction (even of himself). And this whole round of ridiculousness from Kay perhaps helps to illustrate how it’s possible for him to keep losing (claimed wins or not) to someone as regularly ridiculed as modern-day Francesa.