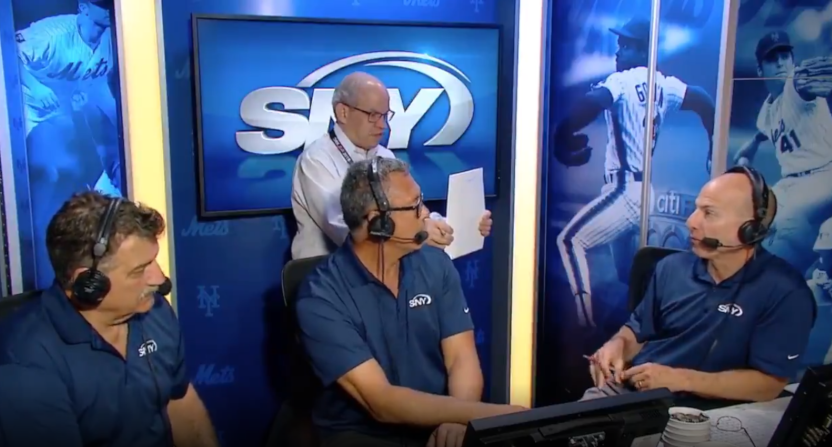 Broadcasts often feature some shots of the announcing booth, and media relations staffers often provide announcers with injury updates or other news, but it’s rare to see those things overlap. That happened Wednesday night during the New York Mets’ 4-3 win over the Cleveland Indians, though, with Mets’ director of media relations Ethan Wilson walking into the booth to tell announcers Gary Cohen, Ron Darling and Keith Hernandez that they were wrong about what pitcher Marcus Stroman’s injury was (Stroman left the game following the fourth inning) while the broadcast was showing a live shot of the announcers.

Here’s what happened, via Roger Cormier of Baseball Prospectus:

I don't think I've seen something like this before: Ethan Wilson from the Mets media relations department inadvertently walked in on a live shot of the TV booth to report they they were wrong about Marcus Stroman's injury. pic.twitter.com/WwtwCyjtr3

This starts with Darling speculating about it being a blister that saw Stroman removed from the game and discussing how pitchers get blisters, saying “The harder you grip it, the more chance you have of getting a blister.” Wilson then walks in with a sheet of paper and Cohen motions him over and says “Well, this is Ethan Wilson from the Mets’ media relations department, and he tells us that we’re totally off base and it’s left hamstring tightness that’s knocked Marcus Stroman out of the game.” Hernandez says “Oh no! You’re the bearer of bad tidings, Ethan!” and Darling says “Ethan, next time come in with the blister issue and we’ll work it backwards.”

As mentioned above, it’s not unusual at all to see a media relations staffer deliver injury information to broadcasters, but the unusual part here was the timing of this coming while the cameras were rolling on the booth. But the booth handled it well, with Cohen’s quick introduction of who Wilson was and what his sheet said providing important context for viewers on what was going on.

It’s also understandable why Wilson wanted to get the hamstring tightness information to the booth quickly, as they were talking about Stroman’s hand after thinking they saw trainer Brian Chicklo examining it. If the issue’s actually with the hamstring rather than the hand, it’s better for everyone if that information gets out there quickly. That just led to an unusual situation this time around. But hey, this is far better than some other times we’ve seen media relations staffers caught on camera, and it’s not even the strangest thing to come up during a SNY Mets booth shot.