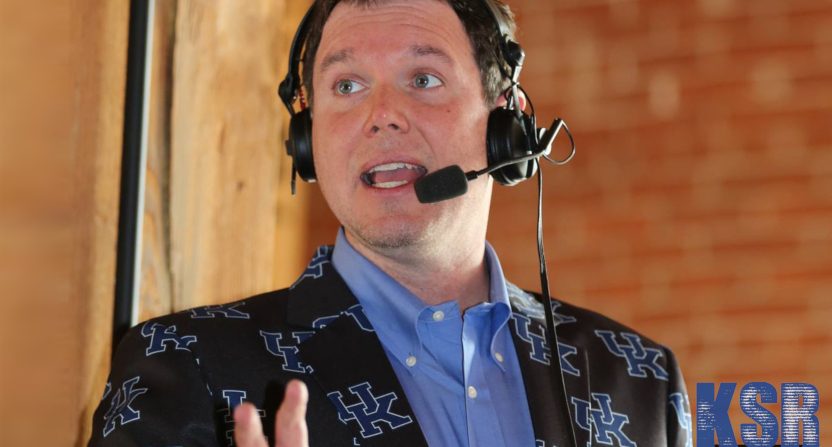 Considering a run for a Kentucky U.S. Senate seat held by Republican incumbent (and Senate Majority Leader) Mitch McConnell has already had some significant implications for Kentucky Sports Radio’s Matt Jones. In August, Jones lost his job on nightly show Hey Kentucky! on Lexington’s NBC affiliate for both writing a book on McConnell and considering running for the Democratic nomination against him, and this month, Jones had to take time away from his syndicated Kentucky Sports Radio show at the request of iHeartRadio after McConnell and the Kentucky branch of the Republican Party filed a Federal Election Commission complaint against him for being on air regularly (even though he wasn’t a declared or filed candidate). On Friday, Jones returned to Kentucky Sports Radio and announced that he won’t run for senate in 2020 after all, and that he’ll be returning to regular radio duties before too long.

As per his remarks Friday, Jones will participate in the KSR pre-game show ahead of a Kentucky basketball game against Vanderbilt Saturday and will host as normal Monday. He’ll then will take some time off to finish his Mitch, Please! How Mitch McConnell Sold Out Kentucky (and America Too) book on McConnell (set for a March debut), and will return to the show as normal Dec. 26. Here are some of his quotes from Friday’s program via Barrett Sports Media, which suggest that he was already leaning towards not running, then was tempted to reverse that decision thanks to the complaint, but ultimately decided against it:

“You shouldn’t change your life out of anger,” Jones said. “I think they screwed up, I think they gave me a chance … all of the sudden, they opened up a chance that wasn’t there.”

While he won’t take any steps towards challenging Mitch McConnell, that doesn’t mean Jones plans on taking it easy on the Senate Majority Leader. His book Mitch, Please! How Mitch McConnell Sold Out Kentucky (and America Too) is due out in March. He also made it clear that he will support whoever makes it out of the Democratic primary to challenge McConnell.

“I do think Mitch McConnell needs to be defeated, and I hope that other candidates get in the race besides me to make that happen,” Jones said.

We’ll see if this marks the end of Jones’ consideration of running for office or if he pursues this again in a future cycle. For now, though, he’s not running, and he’s returning to the KSR airwaves.