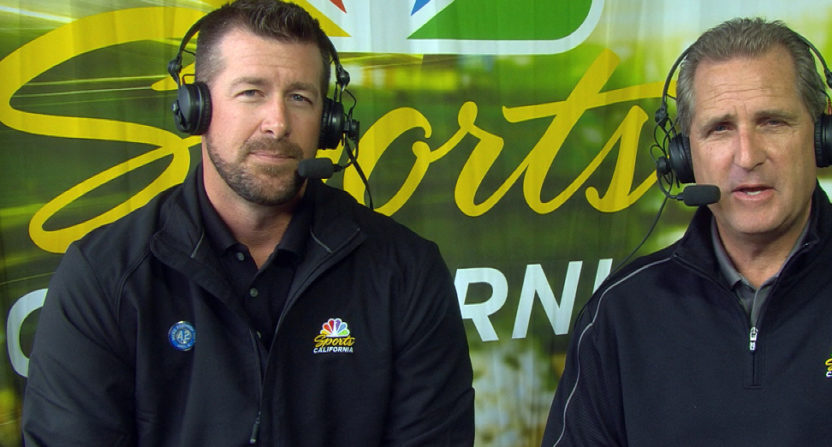 There are some significant changes coming to NBC Sports California’s Oakland A’s broadcasts this year. First, Mark Mulder won’t be on them. Mulder (seen at left above with play-by-play commentator Glen Kuiper) pitched for the A’s from 2000-04 (although you might not know that from Moneyball, book or film) and has been one of a rotating cast of analysts for the last couple of years, working 20 games in 2016 and 35 in 2017.

But he announced on Bay Area radio station 95.7 The Game Tuesday and then on Twitter that the team had “decided to go in a different direction”:

@markmulder20 is on @DamonBruce show right now. He says NBC has decided to go “in a different direction” and he will not be doing A’s broadcasts this season. @NBCSAthletics, what’s up with that?? @Athletics

It was fun while it lasted! Enjoyed each game I got to do for the fans!! https://t.co/aaFqDZdxfw

Mulder then spoke to Susan Slusser of The San Francisco Chronicle and provided more details:

Mulder served as an occasional color analyst for CSN California, working 20 games in 2016 and 35 in 2017, and the A’s at one point had spoken to him about increasing his workload next season, he said.

Mulder said Tuesday night he had “no clue” what had happened. “They told me a little over a month ago that they were going in a different direction,” he said. “The only thing I can really think of is that they are looking for someone who will maybe want the job full-time, not just part of the season like me.”

Mulder, who was a baseball analyst for ESPN from 2011-2015, was popular with fans and had earned positive reviews for his work with the A’s broadcasts.

Former A’s catcher Ray Fosse has been the team’s primary color analyst for the past 29 years. With the team celebrating its 50th anniversary in Oakland, it’s unlikely they’d part ways with the longtime broadcaster, but there are believed to be plans to bring in numerous former players as third men in the booth or occasional fill-ins during the season-long celebration of the A’s time in Oakland.

One of those former players? Former pitcher Dallas Braden, also a former ESPN analyst. Braden joined NBC Sports California as an A’s studio analyst last May after being caught up in the ESPN layoffs, and also started doing a podcast for Barstool Sports in August. And now, he’ll be calling a bunch of games for them, both in the traditional booth color commentator role and in a new “field analyst” role. Here’s more on that from Curtis Pashelka of The San Jose Mercury News:

According to a joint news release by the network and the A’s, Braden will be featured in 35 telecasts as a color commentator and 54 games in the newly created role of field analyst, “reporting from a unique vantage point close to the action.” Braden will also continue in his role as a studio analyst for select pregame and postgame shows on NBC Sports California.

…“Dallas’ presence at nearly every home game in this newly created role will provide a dynamic perspective that fans have not seen before. We are excited to welcome a lifelong A to the broadcast team,” A’s President Dave Kaval said in the news release.

…Longtime in-stadium host Kara Tsuboi will also join the broadcast team as a sideline reporter for a limited number of home games. She replaces Angela Sun, who worked in that role last season.

Braden posted a video announcing his excitement about the new role, too:

Thank you for all the support & well wishes. I am EXTREMELY excited for 2018 & can’t wait to catch some A’s baseball with you folks. #BAYseball #TownBiz #MoundofEmotion pic.twitter.com/yz3eg24xB3

Pashelka’s piece also notes that Fosse will remain the primary color commentator for A’s telecasts this season. But it’s worth wondering if this is about establishing a long-term successor for him; he’ll be turning 71 in April. Mulder’s comments about the team possibly “looking for someone who will maybe want the job full-time” would fit there, and maybe Braden will be that person in the long run. He’s called games before for ESPN, and he’s certainly well-known to A’s fans. But Mulder had a lot of fans for his work in the booth, too, so this is a move that’s already come with a lot of criticism. We’ll see how it turns out.