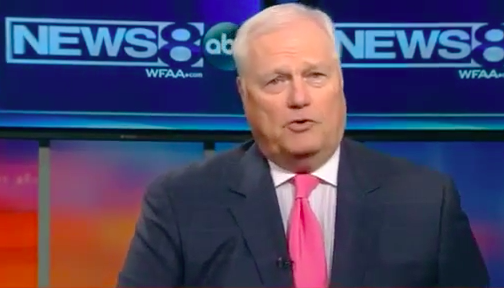 Dale Hansen is an institution in the Dallas area and in the state of Texas. The longtime sportscaster has been with Dallas ABC affiliate WFAA since 1983 and his weekly Sports Special commentaries typically end up receiving plenty of attention, not only in Dallas but all over the country.

On Wednesday night, Hansen was honored with the RTDNF Lifetime Achievement Award. The Radio Television Digital News Foundation is a group meant to set standards in the journalism field and protect the US Constitution’s First Amendment.

Hansen was one of many honored on Wednesday, with winners in other categories including CNN, Shepard Smith of Fox News, and murdered Washington Post journalist Jamal Khashoggi. Previous Lifetime Achievement Award winners include Robin Roberts and Tom Brokaw.

Throughout all of his work, Hansen may be best known for his weekly commentaries. Unlike so many others in the media world, who seem like they need to shape their opinions to fit a persona or to tell viewers what they want to hear, Hansen is always honest. Particularly during times he could’ve taken the easy way out, Hansen talked about some very serious social and political issues that took place within the sports world and gave views that might not have fit with opinions many may have expected from a journalist in the Dallas-Fort Worth market.

Among the many topics discussed over the years, Hansen discussed his support of Michael Sam coming out and his disgust of local fans having racist signs at a high school basketball game. His opposition of Greg Hardy trying to paint himself to be the victim after domestic violence charges were dropped was especially notable in the Cowboys home market. Lately, the Vietnam War veteran discussed kneeling for the national anthem and how those protests did not disrespect the country and the military who defend the flag.

In his acceptance speech, Hansen took aim at the people who believe that journalists who don’t say exactly what they want to are spreading “fake news” and are “the enemy of the American people.”

“I speak, ladies and gentlemen, for my granddaughter. I don’t write for a check. I don’t speak out for an award. I write for my granddaughter. My granddaughter’s black. And not a week in Texas goes by that someone doesn’t remind her of what it means to be black in America. I told my granddaughter Mackenzie, I said, I’m going to DC and I’m going to talk about you in front of this group, and she said “That’s ok, Papa. When don’t you talk about me?” I write for Mackenzie, because I want her to live in a better world than I grew up in and continue to live in today. I want her to have a better world than I had, and that’s why it offends me – it’s why it disgusts me – when we are referred to as “fake news.” When WE are referred to as “the enemy of the American people.” We are the people who tell the truth. We report the facts and we expose the lies. Do we make mistakes sometimes? Of course we do. But anyone –anyone – who is dumb enough to confuse the occasional media mistake with media bias would be dumb enough to confuse today’s weather with climate.”

“We report the facts. We report the facts. We tell the truth and we expose the lies and if not us, who? We provide the checks and balance that is missing in America because we know the House members not nearly enough of ’em will do it. We know too many senators won’t do it. The cabinet has never done it. And we are the last opportunity to provide the check and balance because we are becoming perilously close to the day when our courts won’t do it either. We, ladies and gentlemen, being referred to as the “enemy the American people” offends me because we are the sons and daughters of truck drivers and teachers. Cab drivers and cooks. We are the sons and daughters of those who work on our farms and in our factories.”

“The sons and daughters of those who work on Wall Street and Main Street. Our parents are some of the richest people in America and some of the poorest people in America. We come in all shapes, sizes and colors. We speak several languages. We follow every religion and in some cases no religion at all. We are not the enemy of the American people because we are the American people.”

“We tell the truth. We report the facts and we expose the lies by speaking truth to power. The First Amendment, freedom of the press, might be the greatest use of pen and paper ever and as individually flawed in their personal lives as those founding fathers were it’s incredibly brilliant what they put down on paper. And it has proven to be the bedrock of this Foundation and has allowed America to survive and thrive for more than two hundred and thirty years now. If the day comes… If we were to abdicate our responsibility, if we were to ignore the obligation that we have to the American people that we did not challenge the lies, we did not report the facts, we did not tell the truth. If we allow that day to come to America, then America won’t matter anymore either. What we do matters. What we do is too important to give up now.”

In a time where “stick to sports” is a growing sentiment, Dale Hansen shows how much that is just a fantasy. Sports has been political since the beginning, and people like Hansen are just more willing to talk about those sports-adjacent topics in an intelligent way. That’s why Dale Hansen was honored: for his decades of work as a sportscaster and never once sticking to sports.