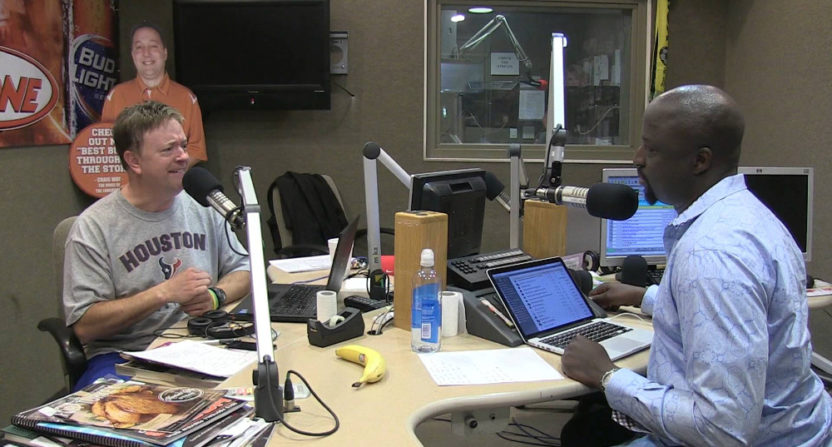 The Austin, Texas airwaves lost a long-time personality this week, with Sean Adams passing away Thursday at the age of 46 following a heart attack. Adams was currently a morning co-host of The Bottom Line on KVET 1300 The Zone with Orangebloods.com’s Chip Brown (seen at left above with Adams), and had been at that station since 2014, but he’d worked for various local sports radio outlets for over a decade and had been a Texas media figure even before that. Brian Davis of the Austin American-Statesman has more on Adams and his impressive career:

He first broke onto the Austin media landscape as a columnist with Orangebloods.com in 2004, the widely-read website that covers Texas athletics. He broke into sports media and used his platform to promote positive thinking while “keeping it real,” according to his personal website. He always showed up for Monday press conferences during the football season with a smile and would shake anyone’s hand, offering a smile or head-shaking reaction based on how UT had played on Saturday.

Over the years, Adams was a regular on various UT-related media outlets, including the Longhorn Network, ESPN.com and Inside Texas.

Adams was originally from Oakland, California, and started his college football career at Cal before transferring to Abilene Christian in Texas. As per his website, he had a MBA and did post-graduate work in public relations and the humanities, and held major corporate executive roles before heading into the sports media. 2012 saw him named the inaugural Research Fellow at the University of Texas’ Program in Sports and Media, with the goal of bringing his experiences to current students. And he was well-loved locally, as the many tributes to him show:

Love you, Sean Adams. You were like a brother. Praying for your family right now. pic.twitter.com/AlRGNAdBOJ

The entire Austin media family is stunned to learn about the passing of Sean Adams, a true positive light in this world. Simply devastating.

Sean Adams was truly one of the good guys. Shocked and saddened by his loss. Prayers to family and loved ones.

All the tributes to Sean Adams are absolutely accurate and show the kind of professional and person he was. Great guy, proud dad. Huge loss.

Saddened by the passing of Sean Adams. Sean believed in life preparation through education and sports. I agree with him. He will be missed.

I'm heartbroken to hear about the passing of Sean Adams. A classy, funny guy, always great to me, one of the go-to guys for Texas football.

“Do something good for someone today. The people who are trying to make this world worse are not taking days off.” #SeanAdams. RIP buddy

Speechless all day. My mentor. First person that believed in me in this business. Put me on the radio when I was 18. My friend, Sean Adams pic.twitter.com/DGPdBp8CNC

Today, we have lost a dear friend and valued teammate, Sean Adams. pic.twitter.com/LAAbJfbXCV

My heart is broken today.

Hearts are broken all over Austin and beyond.

Anyone who knew Sean Adams knew his passion for helping people find a greater meaning in their lives, whether it was tying a life lesson to a football game, a win or a loss – Sean was all about “teachable moments.”

…Sean and I were preparing to fly to Los Angeles Thursday night for the Texas-USC game when I learned of his apparent heart attack. I was devastated. I raced to the hospital and refused to believe he was gone. I couldn’t breathe, couldn’t think. Sean lost his dad to a stroke, and I lost my mom to pancreatic cancer. We talked about our love for our lost parents a lot.

I can hear Sean telling me – right now! – how important it is to reach out to loved ones all the time to tell them how much you love them and care about them.

“It’s not enough to think it, Chip,” he would tell me. “Pick up the phone and say it out loud.”

Austin is survived by his wife, Karen, and his children, Damon and Alex. He’ll be missed.