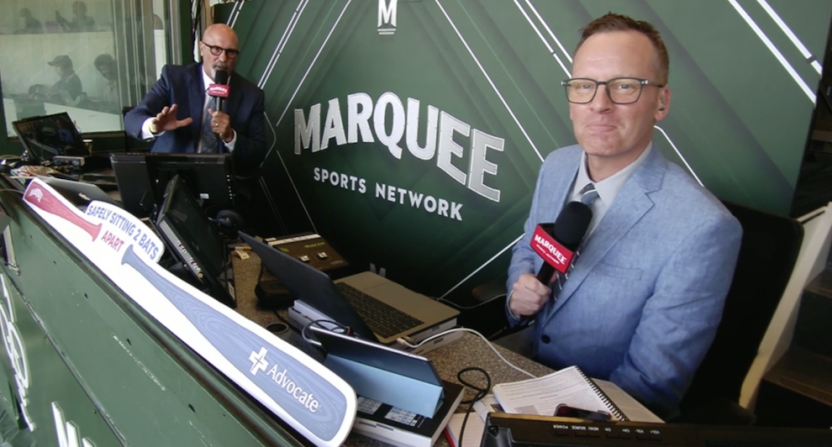 In shocking baseball broadcasting news, Sahadev Sharma of The Athletic reports that longtime Chicago Cubs television play-by-play man Len Kasper is leaving the Cubs to take the radio job with the White Sox. Sharma adds that the news of Kasper joining ESPN 1000 to call White Sox games — where he will work alongside Darrin Jackson — will be announced On Friday.

I expected some big departures from the Cubs this offseason, but this one came as a shocker. Sources have confirmed to The Athletic that Len Kasper is leaving the Cubs to take the White Sox radio play-by-play job. Story: https://t.co/SSBZofOoTx

As the Cubs start a busy offseason, one of the biggest departures is coming from the broadcast booth. After 16 years as the team’s TV play-by-play man, Len Kasper has decided to leave for the vacant White Sox radio job, according to multiple sources.

The move will be officially announced Friday morning on ESPN 1000, the new radio home of the White Sox. Kasper will team with color analyst Darrin Jackson, who returns for his 13th season in the radio booth and his 22nd overall with the team.

Longtime White Sox radio voice Ed Farmer passed away at the age of 70 in April, and Andy Masur filled in for the role.

Kasper has been calling Cubs games on TV since 2005, after previously doing play-by-play for the Marlins on Fox Sports Florida. He’s liked by most Cubs fans and baseball viewers, bringing intelligent commentary and entertaining conversation with color commentator Jim Deshaies (who joined the booth in 2013, replacing Bob Brenly).

While this is a big surprise, maybe it shouldn’t be when considering the Sinclair-operated Marquee Sports Network, which has created a heavily criticized and frankly weird — and surely uncomfortable — operation since becoming the Cubs’ television network. Naturally, it’s impossible to not wonder if Kasper’s exit is largely related to Marquee.

Perhaps it is, but Sharma reports that “there was no bad blood between Kasper and management at Marquee and the decision came from Kasper’s desire to shift mediums,” adding that Kasper “has always wanted to call a World Series.” The young and exciting White Sox may soon offer that chance.

Kasper, who turns 50 in January, has always been passionate about radio and relished his opportunities to sit in on radio broadcasts with Pat Hughes and Ron Coomer during the fifth inning of nationally televised games. Sources indicated that there was no bad blood between Kasper and management at Marquee and the decision came from Kasper’s desire to shift mediums.

It’s also well known that Kasper has always wanted to call a World Series. With games on national television come playoff time, this would be Kasper’s best chance.

So, what does this mean for the Cubs’ television job? Sharma reports that veteran broadcaster Chris Myers is “a leading candidate” to replace Kasper.

Multiple sources told The Athletic that Chris Myers is a leading candidate to replace Kasper in the Marquee Sports Network booth alongside analyst Jim Deshaies.

Myers, 61, has been with Fox Sports for the past 22 years. He’s best-known for calling NFL games on Fox these days, and was an ESPN anchor from 1988-98. He’s actually been part of Marquee, and his role was listed as “play-by-play/studio host” when Marquee announced their absurdly long list of broadcasting hires last January. So, he’s an easy in-house solution for Marquee, but not one that would thrill Cubs fans as a replacement for Kasper.

The source said longtime ESPN and Fox Sports broadcaster Chris Myers will replace Kasper on the Cubs broadcasts, a year after being brought in as a part-time host for Marquee.

It was not immediately clear whether the move was initiated by Marquee or was a power move by ESPN looking to make a high-profile hire with a new radio partner and a team on the field ready to contend.

UPDATE II: During a press conference on Friday (confirming Kasper’s exit), Marquee GM Mike McCarthy and Cubs President of Business Ops Crane Kenney said that they have not named Myers to the position, and said that there will be a thorough search.

Marquee boss McCarthy on search for Kasper's replacement and Chris Myers as candidate:

"We have made no decisions on anything to do with who would replace Len from Chris on down."

Listening to Mike McCarthy and Crane Kenney talk about it, they're saying all the right things about doing a thorough search to replace Len Kasper. Both say big names have already been reaching out about the opening.

Mike McCarthy denied that Chris Myers has the job. He said they've gotten a ton of names and the process is just beginning. Myers is going to host a talk show on Marquee.

•#Cubs HAVE NOT named anyone to the position, just beginning their search

•Will have an opportunity to take a swing at a big name. Looking for someone who fits Cubs culture.