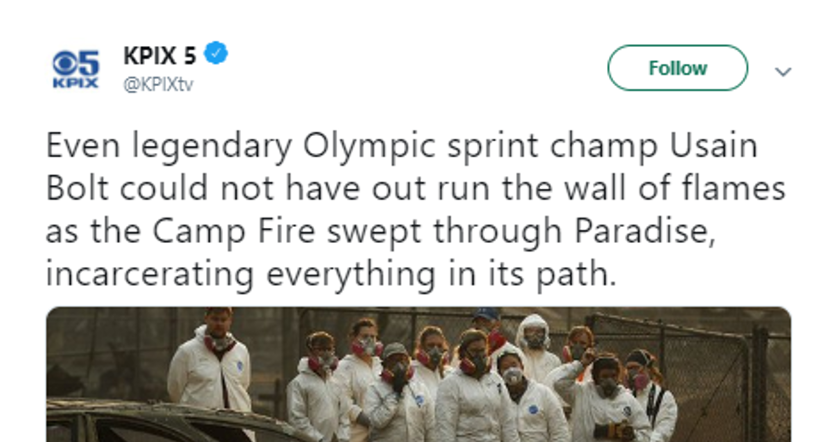 Several wildfires have swept through northern and southern California this week, with the Camp Fire in Butte County (north of Sacramento) in particular causing 42 confirmed deaths so far (the highest toll for a fire in in state history) and hundreds still missing.

Amidst that background, San Francisco-based Bay Area CBS affiliate KPIX decided to make a highly questionable sports analogy Monday when describing how the fire swept through the town of Paradise (which is almost completely destroyed), saying even Jamaican champion sprinter Usain Bolt wouldn’t have been able to outrun it in both a tweet and a story.

Update: They’ve since deleted both. You can see a screenshot of the tweet at the top of this page. Beyond using “incarcerating” (imprisoning) instead of ‘incinerating” (destroying by burning), bringing up Bolt here feels ill-advised. And it’s not just the tweet, it’s the story; that’s since deleted too, but you can see it quoted below, followed by a screenshot of the first part.

Here’s how that piece (headlined “Camp Fire Overwhelmed Paradise Victims In A Matter Of Minutes“) starts:

PARADISE (CBS SF) — Even legendary Olympic sprint champ Usain Bolt could not have out run the wall of flames as the Camp Fire swept through Paradise, incarcerating everything in its path.

Bolt, who is considered the greatest sprinter of all time, owns the world 100 meters record at 9.58 seconds. The Camp Fire ripped through Paradise covering 80 football fields a minute.

At that speed, seconds — not minutes — made the difference between survival and death.

And Paradise was not populated with Olympic caliber athletes. It was a community of 27,000 that was a favorite location for retirees — and about a quarter of the population was over 65.

As of Monday night, 42 victims have been recovered from the rubble of Paradise, Concow and Magalia. Of those, 35 were found in Paradise with dozens still missing.

The victims have been discovered in cars, inside the remains of houses and outside where they tried to outrun the flames.

Look, the base point (“This fire moved faster than any human can run”) isn’t invalid, but this is a remarkably poor way to make that point (not to mention using “out run” instead of “outrun,” or “Olympic caliber” instead of “Olympic-caliber”). If this was a question of “Only an elite sprinter could have outrun this fire,” then maybe it would have made some sense to reference Bolt’s records, but they note that the fire was so much faster than any human could possibly run.

Well, actually they don’t, because they don’t convert the units. But an American football field is 109.1 meters long, so 80 of those a minute is 8,728 meters a minute,  or 145.5 meters a second. So the fire would cover 100 meters in 0.69 seconds, which is more than an order of magnitude better than any human can do. So there’s no particular need to go into Bolt’s records here or even bring him into it; they could just give the fire’s speed and say “That’s much faster than any human can run.”

Overall,this feels like a pretty insensitive way to handle this story. Talking about the fire’s speed could maybe be okay (it feels a little graphic, especially with how they did it, but it is perhaps valuable to illustrate that this wasn’t about people not being fast enough to outrun this fire), if done in a thoughtful way, but this wasn’t that. Instead, KPIX managed to annoy a lot of people. But hey, this tweet and story were still up for several hours before they eventually deleted them, so that wasn’t exactly Bolt-like speed in backing off.