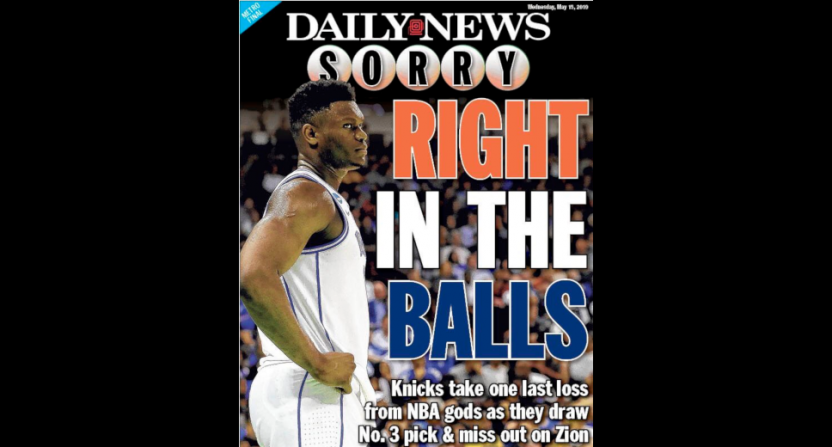 There’s a long-running war between the New York Knicks and the New York Daily News, and that appears to have flared up again. Back in December, the Knicks barred Daily News reporters from attending a press conference with president Steve Mills after the paper ran a “Do It” back page headline for a story about franchise owner James Dolan potentially selling the team. They’ve excluded the Daily News from other media events since then, and they did so in a prominent way again Friday, this time inviting every local media outlet except the Daily News to a press conference with new draft picks R.J. Barrett and Ignas Brazdeikis. And that drew a lot of criticism from media members at other New York outlets and outlets in other cities:

FWIW, The Daily News was not invited to this presser for @RjBarrett6 and @_iggy_braz but every other NYC outlet covering the team was.

Jim Dolan doesn't like the coverage and has effectively banned them from covering the team.

The Knicks barred the @NYDailyNews from a press conference? LONG overdue but the league MUST step in and stop Jim Dolan from doing this in what is supposed to be the most open sports in the league in the world. All credentialed media members get equal access in the NBA!

Wrong. The Knicks play in a league that has credentialed the Daily News to be there. The NYDN can run a "Sell The Team" headline on the backpage every day and you still have to let them in. It's the league's rules; not each team's to make up as they wish https://t.co/GcviHDf5Ek

I don’t get the Knicks endgame banning the Daily News from press events. The News is still going to write about the presser. And the Knicks get (rightfully) clobbered for banning them, partially drowning out the positive message they are trying to get out.

As Mannix notes, this ban doesn’t really seem to be accomplishing much for the Knicks. While the Daily News‘ coverage has often been critical, locking the paper out of a press conference doesn’t stop their coverage of the team (the NYDN’s Stefan Bondy still wrote about comments from that press conference, which was televised on MSG), and it makes the organization look further unnecessarily concerned with what’s said in the media about it. And that’s a long-standing tradition for Dolan and the Knicks, previously seen accusing the NYDN of wishing them “ill will” and claiming The Ringer’s Bill Simmons is “trying to destabilize” the team, going to war with WFAN and Entercom over some comments from Maggie Gray, causing a “shitstorm” by calling Fox executive chairman Rupert Murdoch over FS1 subway ads and keeping detailed dossiers on those who cover the Knicks, leading to ESPN’s Ian O’Connor writing “Media paranoia is an indisputable part of the building’s playbook” in December.

That paranoia still seems to be there when it comes to the Daily News, and the high-profile ban of that paper Friday drew quite a bit of commentary. But the interesting question is if it will actually lead to anything. As Stein mentioned, there are league policies on how teams are supposed to treat credentialed outlets, and the Knicks certainly don’t seem to be following those when it comes to the Daily News. But their previous ban of the paper didn’t seem to draw league ire, at least not publicly, and it certainly didn’t lead to enough of a response to stop them from doing so again this time around. We’ll see if any of that changes in the wake of this latest incident.

[NYDN May 15 cover photo from Manish Mehta on Twitter]