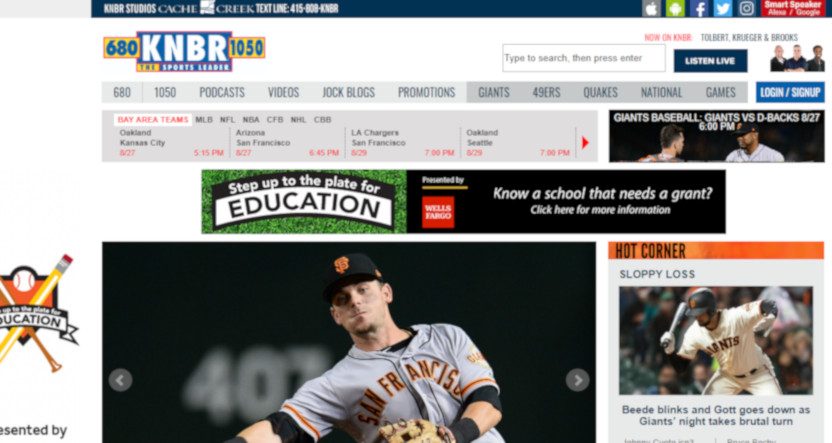 After 36 years on the air, “The world-famous KFOG” is no more. And the reason why is thanks to sports talk station KNBR. On Monday, famed San Francisco/Bay Area rock/alternative station KFOG announced that it would be closing down as of Sept. 6, with its 104.5 FM feed switching to a simulcast of sports station KNBR (also owned by KFOG parent Cumulus Media). KNBR currently airs on 680 AM, and this will put it over on the FM dial as well.

But this move has received a lot of Twitter criticism, as KFOG was such a legendary station. The station launched in 1960 as easy-listening format KBAY, switched to the KFOG call sign four years later, and became particularly notable with its 1982 shift to emphasize rock and especially emerging artists. It offered fans tickets to private concerts at the station, which were compiled on “Live From The Archives” CDs for 22 years (with proceeds going to local food banks). And it put on the annual “KFOG KaBoom” concert and fireworks event from 1994 through 2010, which was a huge deal in San Francisco. Now, that’s all being washed away in favor of further pushing KNBR’s brand of sports talk. And many aren’t happy about that:

Really sad Bay Area radio news today: @KFOGRadio is no more. It used to be one of the great stations in America. Now it will be just an FM signal for @KNBR https://t.co/GnIY9Fwlxj

KFOG is dead, for good. And a little part of Bay Area culture with it. RIP.https://t.co/c2dEBiDs9F

I know it's been a while since KFOG's heyday, but killing it off to simulcast an AM sports station? Hey #cumulus, fuck you for killing radio, and take #clearchannel aka #IHurtMedia with you. https://t.co/0sUl7M3E0o

Not even a proper burial for KFOG?

KFOG had the greatest call letters ever – EVERYONE had it on preset dial from grandma to grandkids – foghead stickers – sad to see it go – another part of my childhood growing up in SF gone – a classic station that deserves the love it’s been getting today ?

Sad. KFOG was a legendary station. How on earth do you screw that station up?

{checks to see who owns KFOG}

https://t.co/mbDZhYNfWA
Well this is utter horse shit. Cumulus kills another legendary station. For years KFOG was like a buddy to me in lots of my day jobs. Dave, Annalisa, Big Rick, all legends. Some things should be sacred…

As many noted, the demise of KFOG was long in the running. Many prominent station personalities were let go in 2016, and further cuts had happened since then, including long-time DJ Rosalie Howarth’s “Acoustic Sunrise” leaving the airwaves in 2018. And as syndicated morning show The Woody Show (a Los Angeles-based show that had aired on KFOG over the past few years  tweeted Monday, “We knew this was gonna happen the minute the company who owns KFOG sold the 97.7 San Jose frequency. It’s an impossible task when nobody can hear the radio station. Without San Jose and east bay, you can’t compete.” But KFOG left its mark on many, as illustrated in this piece from Peter Hartlaub of The San Francisco Chronicle:

KFOG was special because of the unlimited possibilities: The expertise and knowledge of its employees, the creativity of its outreach to the public, and a musical history that had been accumulated on the station’s walls. The loyalty of its listeners guarantees it will be remembered. An alchemy that never meshed with corporate interests proves that, on the terrestrial radio airwaves at least, it can’t be replaced.

KFOG became KFOG in 1982, retiring its outdated easy listening format, and creating a new path that was, by design, undefinable. The station played a mix of local artists, deep cuts from larger rock acts and wild cards that reflected the personality of the individual DJ. It was as if they were making one three-decades-long mixtape for their listeners. You weren’t born a “Foghead” in the Bay Area; you graduated to it when and if you reached a point of musical enlightenment.

“We’ve got the best listeners,” [former KFOG DJ Dave] Morey told The Chronicle in 2002. “It’s like a private club but everybody is in it.”

And a famous and prominent music station becoming yet another simulcast for an existing sports talk station is rather depressing on a lot of levels. Yes, this will give KNBR the ability to reach some extra listeners, but most of those who wanted to hear their content already could. And while this brings some extra range for KNBR, that comes at a cost. “You don’t know what you’ve got til it’s gone” is something you might have heard on the old KFOG, and now that frequency will make sure even more Bay Area residents hear the likes of Murph and Mac, Papa and Lund, and Tolbert, Krueger & Brooks instead. For many, that’s not a desirable change.