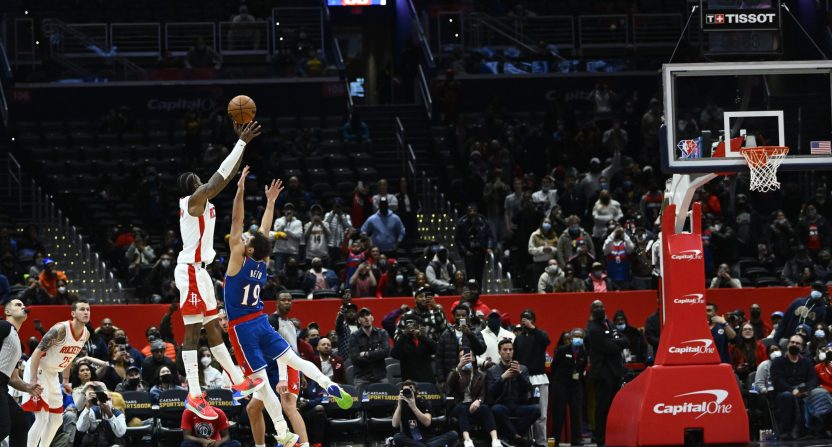 Update: Glenn Consor apologized for the incident (apology at the bottom of the article)

Wednesday night was a special one for Kevin Porter Jr., who returned from a suspension following a heated argument and incident with an assistant coach last week, hit a buzzer-beater to lead the Houston Rockets to a 114-11 victory over the Washington Wizards.

Along with finishing the game with nine points, eight assists, and seven rebounds, Porter Jr. also had a great moment afterward with coach Stephen Silas as they embraced, putting the previous week’s issues behind them.

However, the moment felt a little different on the Wizards’ broadcast, where analyst Glenn Consor described it in a way that was either extremely crass or one of the worst cases of mistaken identity that we’ve heard in a while.

“Kevin Porter Jr., like his dad, pulled that trigger right at the right time”

I can’t believe this was actually said on the Wizards broadcast.. Completely inexcusable. pic.twitter.com/bZcWEVqPOP

“Kevin Porter Jr., like his dad, pulled that trigger right at the right time,” said Consor.

If you’re unaware of why that sentence is so shocking, it’s because Porter’s father, Kevin Porter Sr., was charged with first-degree murder after shooting a 14-year-old girl and spent four years in prison over it (Porter Sr. claimed the gun accidentally discharged, which was backed up by a witness). Porter Sr. was killed in 2004 after being shot five times in a bar following a heated interaction. It’s a story that was recounted in a Bleacher Report video in 2019.

The immediate reaction from a lot of people watching the game was confusion and horror, with many of them going after Consor on Twitter.

thank god color analysts do what they do because where else are you using that distinct skill of working in the most traumatic events of a person’s life in the same voice you say “hits the 3” https://t.co/8JphsZVRNc

Stepping back to figure out how a team broadcaster could say something so crass during an NBA broadcast, some people started to put the pieces together that the most logical (and hopeful) conclusion is that Consor was presuming Kevin Porter Jr. is the son of former NBA player Kevin Porter, who played between 1972 and 1983 for three teams, including the Washington Bullets. That Porter was considered one of the best passers in the NBA during his career.

I want to believe that the announcer thought that KPJ's dad was the former NBA player Kevin Porter from the 70's and 80's. I really want to. https://t.co/lBh0PZg1k8

i think he had to have been talking about this dude thinking he was his dad bc man there’s no way https://t.co/ZQrNJ2wDYT pic.twitter.com/bcbWFlpv5l

I’m almost 100 percent sure Glenn Consor was referring to his father’s basketball career or thought he was related to the former NBA player Kevin Porter. No way he was referring to the other incident. I don’t think it’s common knowledge

That rationale makes a lot of sense as Porter Jr.’s father did not play in the NBA, so it’s unlikely that Consor would be referring to him like this.

There’s been no word by Consor, NBC Sports Washington, or the Wizards yet but we have to imagine a statement of some kind is coming. The sooner the better because the longer that quote hangs out there without context beyond the facts, the worse it gets.

The lesson is, perhaps, that we should try to retire “pulling the trigger” as a euphemism in basketball just to be safe, especially considering the whole reason that franchise is called the Wizards today.

Update: Consor tweeted an explanation and an apology for his poor choice of words