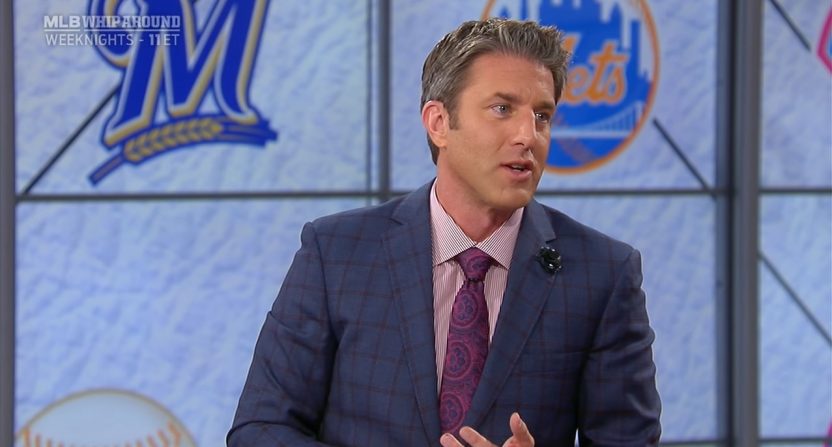 On Thursday, Fox Sports Sun announced that MLB on Fox studio host and NFL on Fox play by play broadcaster Kevin Burkhardt would call a handful of Tampa Bay Rays games for the network during the 2019 season.

OFFICIAL: Excited to announce the addition of @kevinburkhardt to our @RaysBaseball broadcast team! Kevin will call a package of games from the @FOXSportsRays broadcast booth this coming season and we can't wait to welcome him to Tampa Bay. pic.twitter.com/jQ8KbVvGsH

The specific games that Burkhardt will call, presumably in relief of long-time Rays broadcaster Dewayne Staats, have not been revealed yet.

Burkhardt joined the NFL on Fox back in 2013, and landed a playoff game in his first season calling the NFL. He was tabbed as Fox’s MLB pregame host in 2014, eventually leaving SNY and the New York Mets at the end of that season to join Fox full-time, which includes some college basketball studio hosting duties. His NFL work has received widespread acclaim, and AA’s readers ranked him and partner Charles Davis as the league’s #5 broadcast team this past fall.

For the Rays, this could be the first step in determining which direction they go in the post-Staats era. He’s been their primary TV broadcaster since their inaugural year back in 1998, but he’ll be 67 in August and can’t do this forever. On Rays broadcasts, Staats is currently teamed with former Indians and Diamondbacks pitcher Brian Anderson, who joined the team on a part-time basis in 2008, expanding his role in 2009 and 2010 before becoming the full-time analyst in 2011.

Is Burkhardt going to be the guy long-term for the Rays? That’s an impossible question to answer. He’s got a great gig with Fox, and if he has a desire to call a full slate of MLB games, one would think that there would be a line out the door for his services. The Rays will be the beneficiaries of his work this season, and it’s silly to think past 2019 and analyze Burkhardt’s potential future decisions before this year is even over.