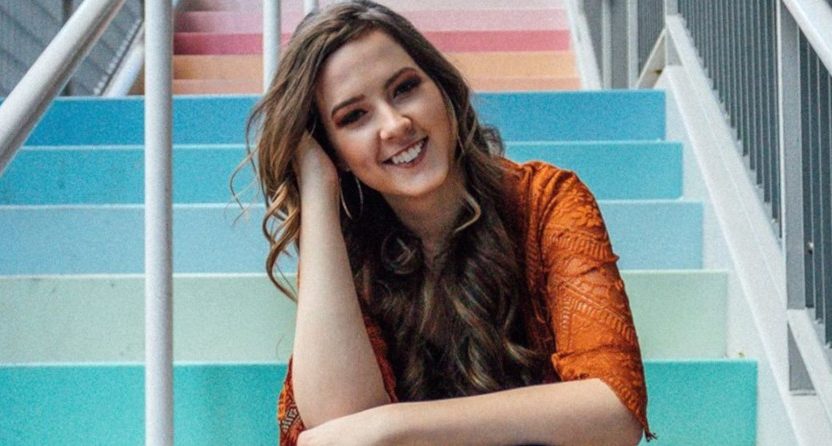 The sports journalism field lost an impressive young talent this weekend. Katelyn Davis, a sophomore at Texas’ San Jacinto College (near Houston) who was interning at The Washington Times, passed away in her sleep Saturday. David Eldridge, the paper’s sports editor and a long-time friend of Davis’ family (she was interning at the paper after years of lobbying Eldridge for a chance, and was staying with him and his family this summer), wrote a thoughtful tribute to her and to what she’d accomplished (despite medical challenges, including long-running and sometimes-severe epileptic seizures) Sunday. Here are some key parts from that:

One night earlier, she and Will, her faithful medical alert dog, were covering a Mystics game for our newspaper, and, sure enough, she rustled up a story on Ted Leonsis, the billionaire owner of the team.

This summer, among other accomplishments, she also:

— interviewed Redskins tight end Vernon Davis, who immediately connected with the girl he called “his cousin from Texas,”

— convinced Nationals All-Star Anthony Rendon to break his “stay out of the media spotlight” rule to chat with a fellow Houstonian about his hurricane relief efforts, and

— scored an exclusive with the Nationals’ No. 1 pick, pitcher Jackson Rutledge, who it turned out was a fellow San Jacinto student.

…When she wasn’t wowing her editor (me) and her fellow reporters with her Oprah Winfrey-like ability to get ANYONE to open up, she was helping other interns, cracking up reporters and sources with her sunny sense of humor and arguing with her editor about why her stories were shorter than she thought they should be (“you’re cutting out too much good stuff!”).

That’s an impressive list of gets for anyone, much less an 18-year-old intern, and it speaks to the promise Davis was showing. And that rang true in the tributes to her on Twitter as well:

Katelyn Davis shadowed me at the Mystics game Thursday night, with her internship at the Times nearing its end. I'm heartbroken to say that Katelyn passed away early Saturday. She was 18. Please pray for her and her loved ones. https://t.co/QnEnOT0qzR

Katelyn was one of kindest people I have ever met. Her smile and personality lit up the room. I’m so glad I had the opportunity to work with her this summer and get to know her. You will be missed. https://t.co/KkhqGmtX30

Speechless…Sadness — Katelyn Davis, Washington Times intern passes. This is an unspeakable tragedy. So young and so enthusiastic about her budding career — Our thoughts and prayers go out to her family and friends. https://t.co/RmjCWBBOdg – @washtimes

Jerome Solomon of the Houston Chronicle also wrote a tribute to Davis:

It warms my soul when young reporters share their love of journalism. Their wide-eyed innocence isn’t usually naivete, just pure excitement that they get to live out their dream.

You can feel the joy and almost touch her faith in Davis’ tweet of a story she wrote about Jackson Rutledge, the Nationals’ No. 1 draft pick and fellow San Jac student.

Y’all this is happening…
I’m truly blessed to be doing what I love! pic.twitter.com/eAxzfqcFrC

On Monday, the Nationals left press box seats vacant for Davis and Joseph White, the prominent former AP writer who also passed away this weekend at 56:

Our thoughts go out to the families of both Davis and White. For those interested, there’s a GoFundMe to raise money for Davis’ funeral expenses.