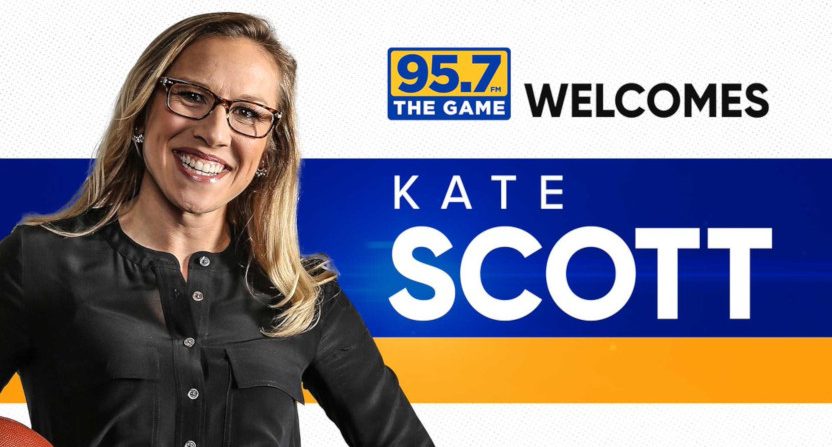 Over the past several years, Kate Scott  (who’s been a sports media figure for a long time, including work as a vlogger for AOL FanHouse, work for the Pac-12 Networks, and work for Bay Area radio stations KNBR and 95.7 The Game, has made quite a bit of history. Scott has called Francisco 49ers preseason games on radio and called regular-season college football (and several other sports) for the Pac-12 Networks, and she called a Blues-Blackhawks NHL game for NBC last year. Now, she’s set to blaze further trails by calling a regular-season game for the Golden State Warriors on their flagship radio station, 95.7 The Game. Connor Letourneau of The San Francisco Chronicle has more on that:

According to Golden State’s longtime play-by-play voice, Tim Roye, Scott will be the first woman to call a Warriors game on the team’s flagship radio station. She will work alongside Mary Murphy and Kerith Burke on the all-female broadcast, which the team announced as part of its celebration of Women’s History Month.

Roye broke the news to Scott on 95.7 The Game’s “The Morning Roast,” which Scott co-hosts, on Thursday morning.

“You’re not going be watching the Bulls and Warriors,” Roy told Scott. “Kate, we want you to be play-by-play.”

Murphy, a former coach who has worked as an analyst covering college basketball and the WNBA, will provide color commentary, while Burke, a reporter for NBC Sports Bay Area, will host the pre- and post-game shows.

This is a cool step for the Warriors and for 95.7 The Game, and it’s hard to think of anyone more qualified than Scott. She’s been a key Bay Area sports media voice for over a decade now, and has done tremendous work not only on play-by-play, but also on studio shows and radio and TV talk shows. And it’s great to see more women given the chance to call NBA broadcasts; the NBA has long had a significant female viewership base, but its media ranks have not always reflected that. While this particular opportunity is only a one-off as part of a celebration of Women’s History Month, it may be a further indication of how many capable women there are out there who could do well on NBA broadcasts in a more regular role if given the chance.

[The San Francisco Chronicle; photo via 95.7 The Game]