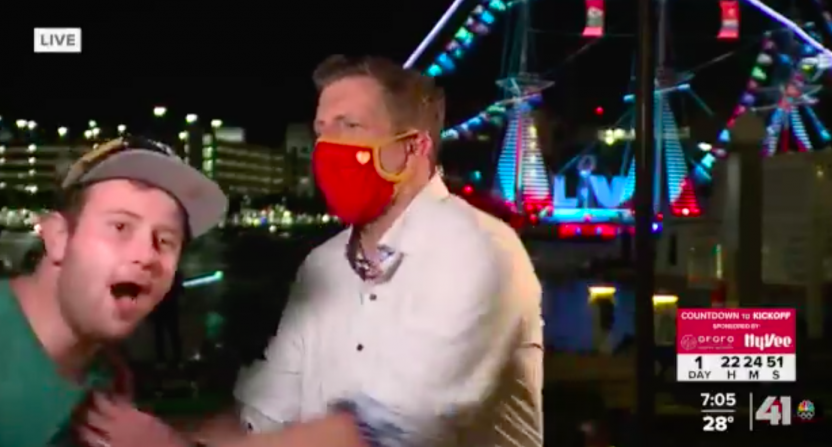 The Kansas City Chiefs find themselves in a situation where they might be without the services of several players for Super Bowl LV due to COVID concerns. If they’re looking for people to take their place, they might want to consider Mick Shaffer, sports director of the Kansas City’s Action News team, who put on a clinic during a live report from Tampa before the big game.

Shaffer was broadcasting live near Raymond James Stadium to provide updates for Chiefs fans back home when an unruly fan decided to poke his head into the camera view. As if instinctual, Shaffer gave the interloper a textbook block, pushing him back out of view and shouting “get out of here,” before immediately returning to form and carrying on with his broadcasting duties.

And just like that, he was back into his report and then wrapped it all up. “I’m gonna send it back to you before it gets even rougher.” Total pro stuff. And his colleagues were there to notice it, as well as wonder if Mick should suit up on Sunday.

Can you start at guard Sunday

And with that block on live TV…@mickshaffer will be elevated Sunday by the Chiefs, per source, after watching his performance tonight? pic.twitter.com/vYO5clSGzY

You don’t come at my sports director like this.

This is your absolute best work sir.

If there is an Emmy Award for stiff arms, Mick just won it. Derrick Henry would see that and be impressed.