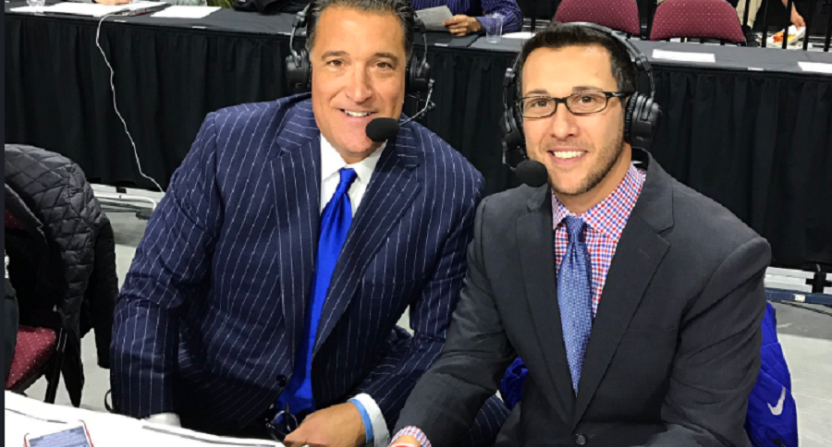 NBC Sports Washington will hire Justin Kutcher to be the new television play-by-play announcer for Washington Wizards games, according to The Washington Post.

NBC Sports Washington is expected to name veteran Fox Sports announcer Justin Kutcher as its new Wizards play-by-play man this week, according to a person with knowledge of the situation.

The Washington Post reports that former Wizards Drew Gooden and Caron Butler will share color commentator duties, with “Gooden calling a majority of the games.” Kara Lawson left the color commentator position to be an assistant coach for the Boston Celtics.

Kutcher, 39, has been with Fox Sports as a college football, college basketball, and MLB announcer since 2012. Before that, he called a variety of sports for ESPN, and also did play-by-play for CSTV, the Big Ten Network, and CBS Sports Network.

But the biggest response from Wizards fans to this news isn’t about Kutcher getting the job, but rather about Steve Buckhantz no longer having it.

Many Wizards are displeased with NBC Sports Washington’s decision to not bring back Buckhantz as the play-by-play man.

I forget the name of the person at NBCSW who said this decision was just on him (suuuure), but please know that nobody wanted this and we hate you. https://t.co/JsR0ewODEM

In a lifetime’s worth of bad decisions made by this inept franchise, replacing Steve Buckhantz could be the worst. Shame on you @WashWizards @NBCSWashington https://t.co/1ndzRgXqRx

Will miss Buckhantz dearly. Also feel for Kutcher because following a legend is *rough* under normal circumstances, but this is… yikes. https://t.co/geCG9i2BQT

Not cool. Nothing against Justin Kutcher, but Buckhantz is a legend and never should have been let go. https://t.co/L1e4BZNb48

I grew up on play-by-play by Steve Buckhantz. Watching games on tv will never be the same to me… I’m disappointed. https://t.co/Z8YgJCO0O3

I am going to really miss Steve Buckhantz. So many memories. It's just not going to be the same without him on the broadcast. https://t.co/HEqdRGxL3M

I'm sorry but who? is replacing a #DMV legend like Buckhantz.. This is yet another example of a pitiful run organization.. Maybe Ted needs to stick to his gambling and Esports fascination and leave the ball and stick sports to the professionals.

what an embarrassment. buckhantz has been a staple of dc basketball for years and it won’t be the same without him on the play by play. disappointed doesn’t say the half of it

So, this isn’t about Kutcher to Wizards fans- it’s simply about losing a beloved announcer in Buckhantz. Hopefully Wizards fans will give Kutcher a fair chance, and he’ll likely win most of them over in time too.