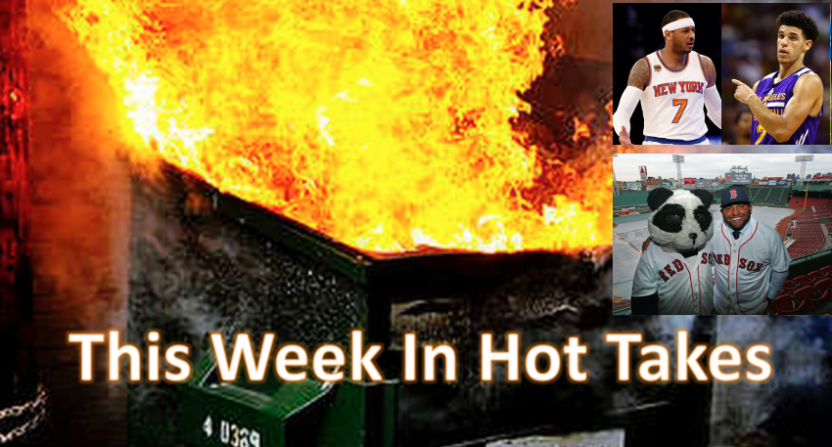 Welcome to another edition of This Week In Hot Takes! Here’s a look at the hottest takes from sports media members from July 14-20.

5. Jim Henneman wants foul balls to count as third strikes to speed up games and defeat the shift: Columnists’ proposals to fix what they see as bad rules are a tale as old as time, but Henneman (of D.C.-based Monumental Sports Network’s affiliated PressBoxOnline site) has quite an unusual one, arguing that baseball should let batters strike out on non-bunted foul balls to end games more quickly and reduce defensive shifting (somehow):

So here’s this month’s proposition: Make all foul balls equal, put the swingers and the bunters under the same restrictions — and after the second strike, make it three fouls and out. The bonus to a rule like this, in addition to helping speed up the game, is the added weapon it provides to combat the shift, something that’s been an ongoing concern the past few years.
Just about every team using analytic alignments exaggerate them to great lengths once a hitter has two strikes. Given the added advantage of attempting a two-strike bunt could encourage more “little ball” — and help keep the defense honest.
It’s a suggestion, not necessarily a solution, but given the fact that commissioner Rob Manfred’s primary concern is improving pace of play; that research has shown foul balls account for roughly 17.5 percent of pitches thrown; and that the shift is dominating baseball strategy, I’m guessing the “Foul Ball Curse” is high on Manfred’s list of items to be addressed.

Henneman deserves some credit for not being fully over-the-top in advocating for this, but from this corner, it feels like a pretty silly idea. Yes, he’s right that the rule has changed before, with foul balls not counting as first or second strikes before 1901 in the American League and 1903 in the National League, and baseball is an evolving game. But this would be an incredibly-drastic change to the game, and while it would speed it up (anything that produces more outs will speed it up), it would also presumably decrease offense substantially. Strikeouts are already high as it is; if you make foul balls count as a third strike, that’s going to boost them further. And it’s unclear why he thinks the shift is bad, and how this is going to solve it. There’s no extra advantage for attempting a two-strike bunt here, just a massive disadvantage for swinging with two strikes.

(Thanks to @baltimoredavey for passing this one along.)

4. Michael Rapaport talks about how New York deserves to be the basketball world’s capital, compares Knicks’ fans to those of the Red Sox and Cubs: Barstool Sports podcast host and Big 3 sideline reporter Rapaport also shows up on FS1 studio shows pretty regularly, and he had an interesting take when talking to Doug Gottlieb (filling in for Colin Cowherd) on The Herd Wednesday. The first part of this is pretty standard complaining about the Knicks, without really offering solutions beyond “fire everybody” (although it has a curious defense of Phil Jackson’s triangle offense from Gottlieb), but it really gets good around 1:30 where Rapaport starts ranting about how great New York is and how awful other cities are:

"It's a pounding, dysfunction and to be honest I'm not getting emotionally involved this year." — @MichaelRapaport GOES OFF on the Knicks pic.twitter.com/ISQv5CDkzF

“I’m so disgusted and frustrated that the Mecca of basketball, the greatest city in the world, I don’t care about Rome, Spain, this place here, Los Angeles, which they refer to as a city, it’s a desert with a couple of high-rises, Chicago, the great city of Chicago that the Big 3…all these places, New York is the place to be, basketball is our game, and the fact that we could have cleaned house but we’re going to head into this year essentially tanking once again. We’re going to turn into the Chicago Cubs or the Boston Red Sox of the NBA, where people like myself are going to be like ‘Please let me live to win a championship.'”

I don’t particularly know what point Rapaport is trying to make here, other than “New York is awesome, other cities suck, and the Knicks should win because of that,” but he doesn’t really enhance it with his comparisons to the Cubs and Red Sox, who both have won championships in the last couple of decades. Does he mean that the Knicks are on the right course and about to win a title?

3. Skip Bayless and Chris Broussard think Lonzo Ball will be a historically good rookie because of Summer League: Fortunately for fans of ridiculous debate, Undisputed hasn’t yet moved to “Talking about FS1 sports.” Nope, they’re here to talk Ball, Lonzo Ball in particular, and they’re going to make some outlandish claims about him. Let’s start with this one:

"Everybody's going to be talking about, and dreading having to play Lonzo's Lakers next year." — @RealSkipBayless pic.twitter.com/9yS0bbtXWX

Yes, everyone is terrified of a team that went 26-56 last season because they’ve drafted a point guard with a more-famous father. Sure, the Lakers have made some nice offseason moves, picking up some solid-seeming draft picks, getting rid of Timofey Mozgov’s contract (acquiring Brook Lopez was secondary there), and signing Kentavious Caldwell-Pope, but they’re a team that’s setting themselves up for next summer. They’re not anywhere close to the list of teams others are most worried about yet. But this gets better when Bayless goes on to say that Ball will average a triple-double in the next few years.

Only Oscar Robertson and Russell Westbrook have ever averaged a triple-double for a season. Each has only done it once. But sure, Lonzo’s going to become the third player in NBA history to pull that off. And we’re basing this off him being a good college player and winning the Summer League MVP? Right. Let’s throw it over to supposed NBA insider Chris Broussard, whose sources suggest Lonzo will average a double-double as a rookie:

BEST SEGMENT OF THE DAY: "Lonzo is special… I think Lonzo will be around 14, 15 points and maybe 10 or 11 assists." — @Chris_Broussard pic.twitter.com/kNv8KA2atG

Beyond that, on The Herd, Broussard said Lonzo will “change the focus of the game”:

"Every so often a player comes along who changes our focus of the game.. Lonzo Ball will bring the focus back to passing"— @Chris_Broussard pic.twitter.com/co1lEyNirS

Of course, because this is embrace debate, the other side was represented, with Shannon Sharpe playing the voice-of-reason role he’s settling into nicely:

And it’s not really related, but you can always count on Michael Rapaport for some odd analysis and pop-culture comparisons:

"Lonzo Ball is playing the Bachelorette with these sneaker companies." — @MichaelRapaport pic.twitter.com/9KgRUzB0wl

It’s a good thing Undisputed is here to provide us with ridiculous Lonzo Ball takes. They’re much better at that then they are at talking baseball.

Rating: ??? for Bayless and Broussard.

2. Phil Mushnick is mad at Neil Everett and Stan Verrett for celebrating a dunk: New York Post columnist Mushnick is famed for his anti-celebration rants, and he had a great one this week, using a note near the bottom of this column to go in not on athletes, but on SportsCenter anchors:

ESPN’s No. 2 “SportsCenter” play of the day, Saturday, was a needless, showboating off-the-glass slam dunk in a game given no context other than that it included that dunk. Anchors Neil Everett and Stan Verrett hooted their approval and admiration as if they’d never before seen a slam dunk, when they’re seen every day, all day and for years on ESPN.

Oh no, not dunk highlights! No one wants to see those! Mushnick’s ideal version of the top-10 plays of the day would just be gritty baseball players trying to run out ground balls and basketball players running technically-perfect layup drills. And it would air at 7 p.m. Eastern so he can go to bed.

1. Tony Massarotti thinks baseball players “have too much power”: Pablo Sandoval’s release by the Boston Red Sox led to lots of takes about that being a bad contract, which is true. Massarotti, a Boston radio host (for 98.5 The Sports Hub; see Samer Kalaf’s extensive Deadspin breakdown of Boston radio hosts for more on him), took it to a new level by saying that Sandoval’s contract proves players “have too much power” and should be paid less:

Baseball needs a buyout provision in the next CBA. Players have too much power. Sandoval the worst case of fat and happy.

First off, no one made the Red Sox sign Sandoval; they decided to do that on their own. Yes, they had to offer him a lot of money in order to get him, because he was a talented player who’d posted some good seasons and had a market for his services. None of that means players have too much power. And this is a variety of a particularly stupid gripe we regularly see about baseball free agency contracts and players who underperform.

This makes sense when you consider how baseball contracts work; players hit unrestricted free agency very late in their careers, and players decline with age, so there are always going to be many who don’t live up to those contracts. And teams have to offer longer-term contracts than they’d probably like because it’s a competitive market; in many cases, they’re paying for past performance, are hoping to get a few good years, and are willing to accept the price of a later decline.

So yes, older players are sometimes paid more than the value they produce. But this is offset by younger stars making nowhere near what they’re worth because they can’t hit unrestricted free agency, and young players who run into injuries or declines never get truly rewarded for the value they provided. In any case, it’s bizarre to say that Sandoval’s contract shows that players have too much power. No, it shows that the Red Sox made a bad signing.