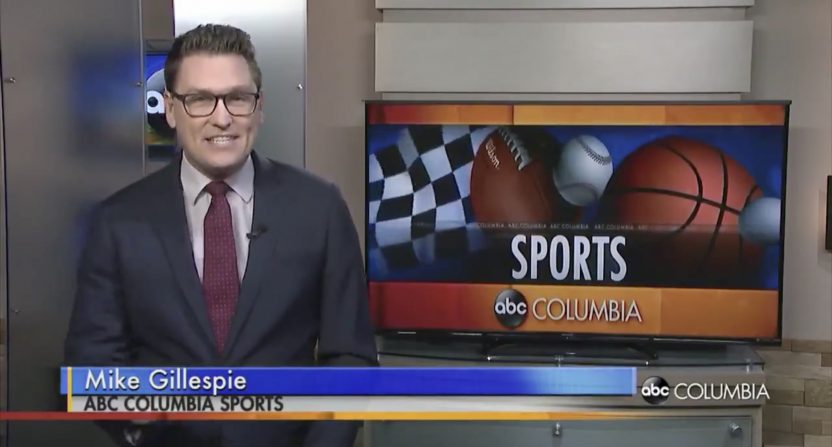 In a world without sports, local newscasts are still finding ways to use their sports anchors and reporters. Some are folding them into the news staff while still utilizing their broadcasting talents, and others are sticking to normalcy by keeping the sports segment alive. Either way, sports reporters are still employed by their local stations.

NFL free agency this week has helped to fill the three minutes that make up an average local sports segment, but once this now-rare period of sports activity passes, they’ll need to find creative ways to fill time.

Sports are canceled, they said. There will be no sports news, they said.

Had the game been actually played, it might have been quite the barnburner. Take a look:

Over at Providence’s WJAR, sports reporter Joe Kayata appealed for home video of trick shots for a “Play of the Night” segment. While Joe failed to hit his attempt, others were successful.

Attention all kids in R.I. and Southeastern Mass!
Go outside and film yourself doing a trick shot in really any sport. Send it to me.
Then tonight at 6 we will pick the top play to air on air @NBC10#nbc10playofthenight pic.twitter.com/esTmEtA8lW

Mike Gillespie of ABC Columbia (WOLO in South Carolina) said he will continue to anchor the nightly sports segment until his bosses tell him otherwise:

The Twitter account Local Sports Anchor asked its followers if they were still reporting sports or going to news, eliciting these responses:

Became the new 4:00 news anchor with plans to do sports stories on the side. Lucky to be busy!!!

In the last 12 hours, I've anchored a sportscast, directed a newscast and been a photog for a live shot.

Sprinkling in sports where I can but if the news department needs me I am there.

This is a time where we all need to help out in whatever role we can – whether it’s anchoring, reporting, producing, running audio or teleprompter, getting the studio set up, answering phones, etc. https://t.co/xJkTS2YhND

Guess who’s trying their hand at news tonight? ? join @AnnEmmerich and I as we co-anchor the first hour-long version of our 11 PM show! @wilxTV #SportsTurnedNews pic.twitter.com/Q03ssCgm36

Going to try and have a little fun over the next few weeks. I'm going to have a "guest sports anchor" on set with me during the 6 sports on ABC 25 and let them step in a do my job LIVE.

Shifting to reporting and producing for the next several weeks. I could complain, but I've got a job and working with a great team. Keep working and keep smiling! pic.twitter.com/ZyOHUiBs06

I am still holding on with sports stories so far this week! I think that trend is slowly coming to an end, news here I come!

As you can see, some sports reporters are contributing to their newscasts by shifting to news, while others are doing their best to fill their normal segments. But the best advice came from Zach Borg of Dakota News Now who said in times like these, using file footage and B-roll video are key for putting together a report.

To @LocalTVSPXPrbs -this is when sports archive is critical for a lot of features we will do. And it’s a lesson when life does return to normal-SAVE everything, not just what airs. Bench shots, extra plays, etc. You never know when it will be needed. pic.twitter.com/sHo58a5Dom

As the days without sports pile up, local news will continue to monitor the coronavirus to determine whether their sports staffs will remain on the athletic side or if they’ll join their news brothers and sisters. It’s certainly a trying time for everyone involved, although they’re clearly trying to make the best of an unprecedented situation.