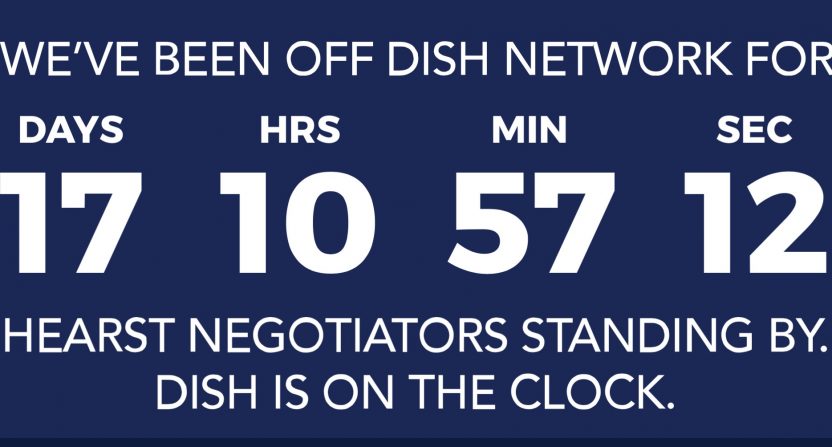 The Heart Television-Dish Network dispute is into its third week without any end in sight. To signify how long it’s been, Hearst has now launched a countdown clock on its station websites. The discussions between Dish and Hearst ended on March 3 without an agreement and the stations across the country have been blacked out on the satellite provider ever since.

Hearst has 33 stations in 26 markets including Baltimore, Boston, Kansas City, Pittsburgh, Sacramento and Tampa. Both sides are blaming the other for the dispute. Last week, Dish publicly pleaded with Hearst to end the impasse in the following statement:

“Hearst blacked out millions of DirecTV customers in January, and eventually the two sides reached an agreement,” Dish said in a statement. “Before Hearst blacked out Dish customers two weeks ago, we said that we would agree to the same terms as DirecTV. That offer remains on the table. Hearst should do the right thing for consumers by agreeing to the same terms as its deal with DirecTV and restoring its stations to the Dish lineup today. Dish is committed to reaching a fair agreement with Hearst to end this blackout.”

Shortly after that statement was issued, Hearst launched its shot clock as part of a new ad campaign in radio, print and websites to inform customers how long the dispute has been going.

Hearst issued an open letter to Dish earlier this month telling viewers its side of the story. No matter which side of this dispute you believe, it’s left the subscribers in the middle. People don’t care about the impasse, they want to turn on their TV’s and be able to watch their local stations for news, sports and entertainment programming.

With viewers unable to watch the NCAA Tournament, NBA, golf, NHL, Olympics sports and English Premier League on the Hearst stations, it forces them to find other methods to watch. April isn’t that far away and hopefully, the two sides will find a way to come together instead of continuing the blackout.