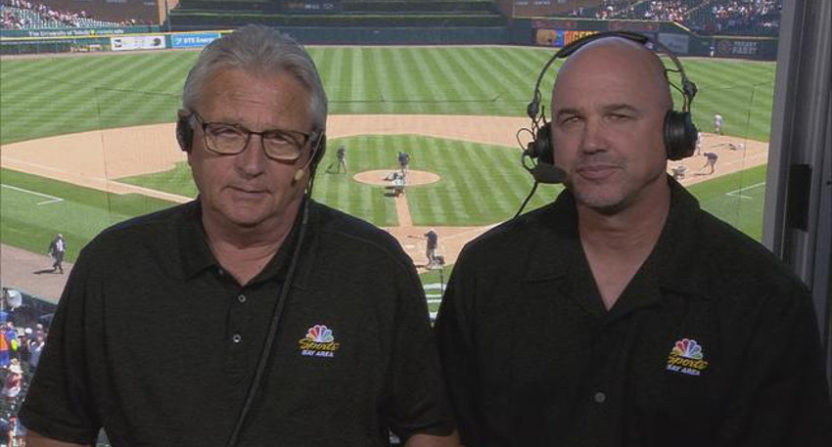 Fans of the San Francisco Giants have generally been very positive towards their local TV broadcast team (most often Mike Krukow and Duane Kuiper; Dave Flemming and Jon Miller swap in from the radio side from time to time, and Javier Lopez and Jeremy Affeldt have been analysts for select games), ranking them first overall in our 2014 rankings, second in 2016, and first overall again this year. However, the reviews turned awfully sour this week. With the Giants in Detroit for a three-game series and Krukow staying home (he’s cut back to 120 games this year thanks to mobility issues stemming from a progressive muscle disease), former Giants’ catcher and current team scout Brian Johnson (who lives in the Detroit suburbs) filled in on NBC Sports Bay Area. His performance didn’t go over well:

Wow. Brian Johnson in the booth is gonna kill me

No offense Brian Johnson, whoever you are, but I want Javy on a road game! ?#SFGiants @NBCSAuthentic #WhatABummer

Five seconds of Dave Flemming and Brian Johnson calling an Austin Slater at-bat and I'm ready to push the girls toward Cal.

(Johnson, seen at right above with Kuiper, is a noted Stanford alum. He played quarterback there, as well as leading the Cardinal to two College World Series titles.)

Brian Johnson is only doing the Detroit games right

Chris Stratton is not a young guy. #SFGiants

The go to Brian Johnson drop is: "What would u do here Jon?"

Not entirely sure, but I just don’t know if the Brian Johnson experiment is working.

Brian Johnson "If you ignore the month i’ve taken off work, this is a great month of work”

it's like "if you ignore that one home run, brian johnson kinda doesn't even exist on the planet earth" https://t.co/yr6xiISVTb

Jon: "For being named Player of the Game what does he get?"@flemmingdave: "Absolutely nothing."

Brian Johnson: "Let's double it for him."

Does Brian Johnson ever shut his mouth?

In hopes that the Brian Johnson experiment is over, one last comment: listened to him on the PGW, and he was even worse than on TV.

We don't have to listen to Brian Johnson anymore, so,,,
did we really lose??#SFGiants

Yikes. In fairness, Johnson did have some defenders as well:

But those defenders were a pretty significant minority. And from this corner, Johnson’s detractors had a point; listening to two of these games, he occasionally offered some useful analysis (especially when it came to the Tigers, and to how Comerica Park plays), but his inexperience in the booth definitely showed, and he wasn’t that interesting or engaging much of the time. Worst of all, he occasionally made those sorts of “Huh?” comments, like praising Thursday’s aforementioned five-earned-run start from Chris Stratton.

On the other side, though, some of this may be about the dropoff. Krukow and Kuiper are two of the most famed local broadcasters out there, and Miller and Fleming are both known for their national work (past and present). Throwing someone else into that mix is tough, especially if they’re inexperienced, and similar criticisms have popped up for Lopez and Affeldt (particularly for the latter). Johnson’s performance may have gone over better if he was working in a booth where the regular announcers weren’t that loved in the first place. Still, this certainly wasn’t great, and the critics have significant points regardless of who Johnson was filling in for.

Overall, this may be yet more proof that it takes more than a connection with a franchise to make a good on-air analyst. Johnson has that; while he only spent two seasons with the Giants (1997-98) during his seven-year MLB career, he hit a memorable September home run against the Dodgers in 1997, which tied San Francisco with L.A. atop the NL West (which the Giants would go on to win). And he’s clearly kept up with the team since, working as a scout for them since 2010. But there are a lot of other elements that go into broadcasting; in particular, on-air chemistry, knowing what to say and when to say it, and providing insight rather than obvious comments. Judging from the Twitter reaction in particular, this Johnson experiment wasn’t a success.