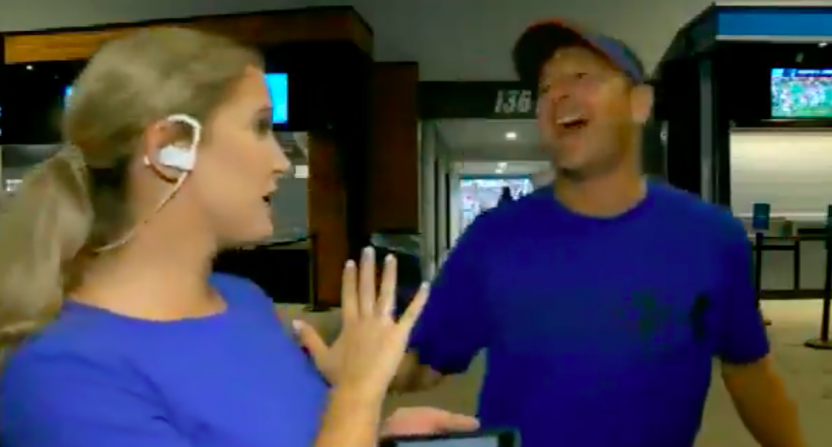 Lyndsey Gough, sports director for WTOC11 in Georgia, was doing on-site reporting from Mercedes-Benz Stadium in Atlanta this weekend for the highly anticipated game between the Georgia Bulldogs and Clemson Tigers. Attempting to set up a shot in the concourse, Gough found it incredibly hard to do her job thanks to a seemingly never-ending parade of fans and spectators, many of whom seemed intoxicated and some of whom had no problem invading her personal space and even touching her without consent.

She posted a collection of clips on Twitter to highlight the perils of the job.

After the first guy touched me I started rolling… this isn't even all of it. So uncomfortable. Can we please respect people's space pic.twitter.com/1r0VQVoBoq

Naturally, you had a collection of respondents essentially asking, ‘what did you expect?’ and ‘it’s almost like you asked for it.‘ Since we’ve seen people jump in front of cameras and interrupt live broadcasts for years, some people assume that reporters should just accept that these things are going to happen and stop complaining, especially if they’re women.

I don’t care about them being on camera. I care about them touching me and my equipment and violating my space. Especially in a pandemic. Why is this so hard to grasp https://t.co/FI0kXku3CB

But it was less than a week ago that we saw exactly why those situations can be so dangerous when we saw a man assault MSNBC reporter Shaquille Brewster and his camera crew during a live broadcast. Not to mention the well-documented perils that female reporters face in situations like this. “What did you expect” or “If you don’t like it get a new job” tries to make it okay for men to touch a woman they don’t know and get right up in her personal space as if it’s just a normal thing you’re allowed to do, and that’s ridiculous. It’s fair to expect people to be excited and raucous at a football game, but it’s not fair to let them do whatever they want to you.

She is me. And I'm pretty good at my job. Why do people think because I'm on tv they have a right to touch me and my (very very expensive) equipment? I don't go to your work and mess with you and your stuff. Cheering I don't mind a bit. https://t.co/qRCtndwF49

Many people, including other female reporters, chimed in to defend Gough’s stance and reiterate that you can enjoy a game, be an excited fan, and have fun without also being a creep and/or getting in someone’s personal space. Many of the reporters shared their own experiences of dealing with similar situations.

Can’t believe we have to constantly remind people not to do this … what if someone touched you, got right up in your face or literal work while you’re trying to do your job. Just because it’s not a typical “office/work space” doesn’t mean it’s not work. https://t.co/EDPebgorbT

Many times reporters are expected to do these live shots alone (often at night) with no photographer and no crowd control assistance.

Please folks…we get that you’re excited about the game, but as she said…respect her space. She cannot see you coming up behind her. https://t.co/lTTGdlGbad

Friendly reminder that you never, ever, ever need to touch a woman or be in their space like this EVER but ESPECIALLY when we’re working. I’ve had one too many of these experiences and it’s not okay. https://t.co/3VVEo5dOFa

I was so nervous during Lyndsey’s 11pm live shot.

Cheering and photobombs are okay, BUT IT IS NEVERRRRRRR OKAY TO TOUCH A REPORTER.

STOP ACTING A FOOL THE MINUTE YOU SEE A CAMERA https://t.co/XnMbeaqPvp

I had a fan grab my microphone and my hand yesterday to say something. This scene unfolding for Lyndsey is horrific. Help women. Help women in sports. This is gross. https://t.co/6sJzSqh6Mo

Dudes, I promise you can still have fun and be excited about your team winning without touching people you don’t know. https://t.co/LO6Zv7xagR

I truly feel so blessed for all the people in my corner.

There’s a fine line between a playful interaction in the background of a live news report and inserting yourself into the moment with a complete stranger who doesn’t know you or what you’re capable of. The best way to make sure you’re on the right side of the line is that, when you see a reporter doing their job, just keep on walking. Because none of the people in this video who interrupt, touch, or invade the space of Gough come off looking good or reasonable. They might have all hoped this was going to be their wacky moment of viral fame, but now they’re immortalized as a bunch of weirdos and creeps.