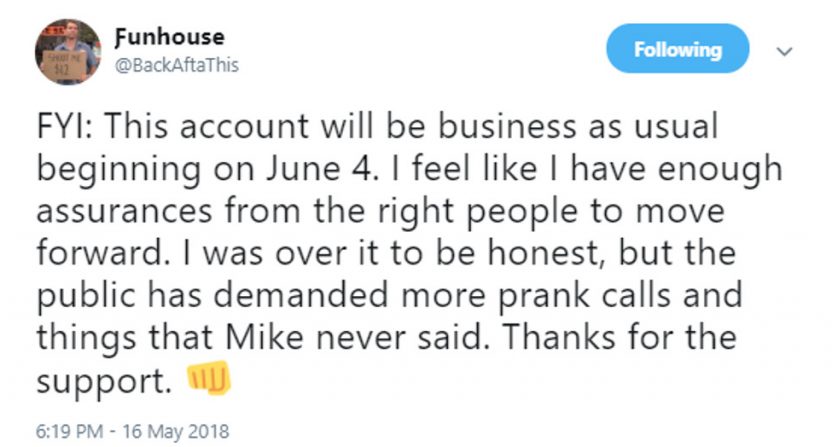 Mike Francesa’s return to WFAN has had some interesting impacts so far, from media fights to all sorts of takes. And some of those developments are taking place in the social media realm. Part of Francesa’s return is reportedly an app he’s working on, and there aren’t many details on that yet, but there was a much-lauded “social media update” on the show Wednesday, which actually turned out to be just Francesa saying he’ll start his own personal Twitter account Friday. And while that has entertainment potential, a much more momentous social media update around Francesa came Wednesday night from Twitter user Funhouse (@BackAftaThis).

Funhouse has posted a ton of memorable Francesa clips over the years and done a lot to make Mike the “internet gold” he claims to be. But recently, he stopped posting clips following a copyright takedown instigated by a WFAN producer, and spoke to Andrew Marchand of The New York Post (as a footnote in the infamous “Why is ESPN paying Katie Nolan seven figures?” column) to say he’d only return to posting clips if he received assurances it was okay from WFAN parent Entercom. Well, it sounds like he’s received some of what he was looking for, as he tweeted Wednesday night that he’ll be back on the Francesa beat as of June 4:

FYI: This account will be business as usual beginning on June 4. I feel like I have enough assurances from the right people to move forward. I was over it to be honest, but the public has demanded more prank calls and things that Mike never said. Thanks for the support. ????

From this perspective, the takedowns of Funhouse’s clips were incredibly short-sighted from WFAN. He wasn’t posting their whole show, but merely short segments of Francesa saying particularly odd things or receiving particularly unusual calls, and those clips brought a whole lot of attention to and publicity for Francesa’s show. That was perhaps especially true outside the New York market; Francesa’s show has always been incredibly New York-centric (part of why his simulcasts on FS1 didn’t work out, to say nothing of the Champions League preemption), to the level of, say, interviewing the St. John’s soccer coach to get a basic explanation of the game during the 2014 World Cup, and much of the larger sports world (especially those too young or without the New York background to care about the saga of Mike And The Mad Dog) has only really heard of him through clips that went viral. (And many still haven’t, as shown by the countless original “Who?” replies we get to each Francesa piece.)

Do those clips really translate into big listener gains for WFAN? Not necessarily. There likely aren’t a ton of out-of-town people who are going to tune in to hours of talk about New York sports teams on the off-chance something viral happens, and a sizable number of in-town people probably already have decided if they’ll listen to Francesa or not regardless of if they see things about him on the internet. But talk about your personalities can certainly help attract some of the undecided, and it seems likely that Funhouse’s clips over the years and the ensuing discussion of them have brought at least some new regular listeners to Francesa’s show, looking to see what the fuss is all about.

Beyond that, though, it’s maybe more important that there doesn’t appear to be much downside to having someone post clips of your show. People looking for the whole show are still going to access it through the WFAN site, or maybe this promised app when it eventually launches. And yes, some of the discussion around individual clips is making fun of particularly silly things Francesa says (cf. “Is that a new report or an old report?” “So their name is just the New York City Football Club?” , and especially the always-popular “I never said that!”) but that’s not all bad for him or the station either.

Being talked about in any fashion is much better than indifference, and it’s worked out pretty well for Mike to this point. And with Funhouse returning to posting clips, it seems likely many more people will pay attention to Francesa again. His return is certainly a boon for those of us looking to keep tabs on Francesa-related absurdity, and it’s promising that it sounds like WFAN has realized that isn’t a negative for them. And hey, Funhouse’s exit and then return wound up being even shorter than Francesa’s own, which is saying something.