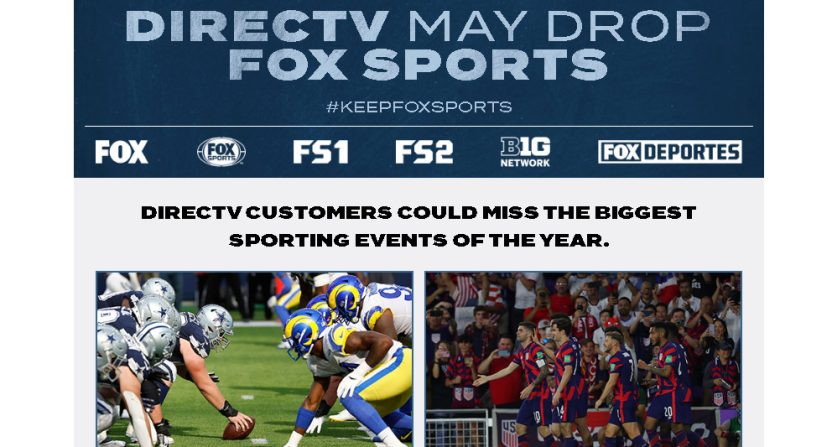 The latest possible carriage dispute comes at a busy time of the sports calendar. Fox announced Sunday that their agreements with DirecTV, DirecTV Stream, and Uverse are expiring as of midnight on Friday, Dec. 2, as Philip Swann and John Ourand relayed:

Fox: "We are compelled to alert viewers who are DirecTV, DirecTV Stream and U-Verse subscribers that they could lose access to their favorite FOX programming beginning at midnight, Dec 2," citing the NFL, Big Ten, World Cup and local news. https://t.co/pHpaobbB2J

As Swann’s piece notes, this would include the owned-and-operated network affiliates Fox has in 18 markets, plus cable channels FS1, FS2, Big Ten Network, Fox Deportes, and Fox Soccer Plus. (It does not include Fox News, Fox Business Channel, or Fox network affiliates owned by other companies.) The 18 O-and-O markets in question are (in order of Nielsen market size) No. 1 New York City, No. 2 Los Angeles, No. 3 Chicago, No. 4. Philadelphia, No. 5 Dallas-Fort Worth, No. 6 Oakland – San Jose – San Francisco, No. 7 Atlanta, No. 8. Houston, No. 9 Washington DC, No. 11 Phoenix-Prescott, No. 12 Seattle-Tacoma, No. 13 Tampa-St. Petersburg (Sarasota), No. 14 Minneapolis-St. Paul, No. 15 Detroit, No. 17 Orlando-Daytona Beach-Melbourne, No. 37 Milwaukee, No. 38 Austin, and No. 160 Gainesville (where the local Fox affiliate is a semi-satellite of the Orlando Fox affiliate).

Thus, a dispute involving those affiliates would impact a lot of big markets. And while there are of course alternative ways to get broadcast stations (including antennas), this could still matter for those who are used to watching those affiliates through DirecTV/Uverse/DirecTV Stream. And there are a lot of big sporting events on network Fox that could be impacted by any prolonged outage here, including two Round of 16 matches Saturday, the Mountain West and Big Ten conference championship games Saturday, and a NFL singleheader Sunday.

The other notable impact here is going to be for the cable networks, which don’t have an antenna workaround. In particular, FS1 will have the both of the Round of 16 matches on Sunday. And if the U.S. manages to make it out of Group B (they’re currently third behind England and Iran, but face Iran Tuesday), they’ll play either Saturday on Fox (if they finish second) or Sunday on FS1 (if they finish first).

As with any carriage dispute, the sides each have narratives about what’s at issue here. Fox’s website on that is seen above. Matthew Keys summarizes the parties’ public comments in a post at The Desk:

In a statement, a Fox spokesperson said it was “committed to reaching a fair agreement with DirecTV for the continued distribution of our networks.”

“Despite our best efforts for months, we regret that DirecTV continues to demand unprecedented special treatment that represents a wholesale change to our long-standing relationship and is out of step with marketplace terms,” the spokesperson said.

…In a statement, a DirecTV spokesperson said a future deal “depends solely on Fox,” and said it is “working hard to reach an agreement” with the broadcaster.

Of course, many carriage disputes get resolved just before deadlines. Others see the deadlines expire without channels being removed if negotiations are close. So there’s a chance this will all lead to no disruption. But we do see the occasional dispute that leads to an actual loss of coverage, sometimes spanning several days and sometimes going on for years. We’ll see how this one winds up. But it’s certainly worth tracking, especially given the sports Fox has right now and the size of the O-and-O markets involved.