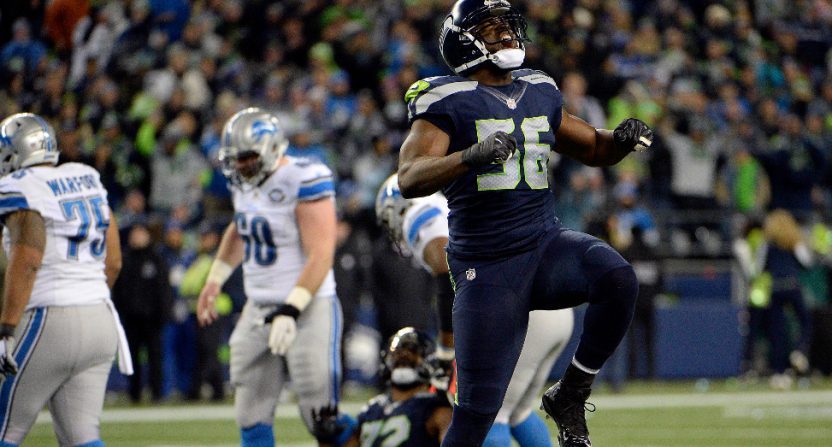 It didn’t take long for Cliff Avril to find a new job in Seattle. The popular Seahawks’ defensive end, who had been with the team for the past five years, was released Friday at the start of the team’s minicamp, and that release (which came after he failed a physical) came in the wake of a neck injury last year after he was kicked by Colts’ quarterback Jacoby Brissett. That injury caused him to lose feeling in his extremities, and it eventually required surgery and saw him play in only four games.

The 32-year-old Avril has already found a job off the gridiron, though, with Seattle sports radio station 950 KJR announcing Monday that they’re adding him (effective July 9) as a co-host of their midday show with Jason Puckett:

Avril is joining the on-air staff at Sports Radio 950 KJR. The Jason Puckett and Cliff Avril Show will air from 10 a.m. to 1 p.m. weekdays with Avril bringing a comprehensive insight into the Seahawks to the KJR airwaves. Avril has been a frequent guest on the radio station the last few months since the end of the Seahawks’ season in January.

“I’m excited to join the KJR team!” Avril said. “Seattle is home and I can’t wait to cover the best sports city in the world.”

The Jason Puckett and Cliff Avril Show will debut on July 9.

“Cliff Avril is a tremendous addition to our team at Sports Radio 950 KJR,” said Rich Moore, Senior Vice President of Programming for iHeartMedia Seattle. “Cliff is a beloved Seahawk who will embrace this community and truly engage with the Seattle sports fans on all our platforms. Cliff had an amazing career and we are lucky to be part of his next chapter.”

While many NFL players do wind up in post-career media roles, this one’s notable on a couple of fronts. For one thing, Avril is only 32, and he’s only one season removed from a Pro Bowl appearance (following the 2016 campaign, where he posted 11.5 sacks). That wasn’t an anomaly, either, as he had nine sacks the year before. And while the failed physical certainly hurt his opportunities of catching on elsewhere, plenty of teams are willing to take a chance on players with his level of production. And as recently as Friday, in a goodbye letter to Seattle fans posted on The Players’ Tribune, Avril appeared to indicate he hadn’t ruled out trying to catch on elsewhere:

As of right now, I’m not sure what the future holds for me. A lot of people have been asking me if I’m considering retirement, and all I can really say is that I’m working closely with my doctors and that I’m going to make the best decision for myself and my family when the time is right.

Hanging up his cleats to head into the media may work out for him, though. Avril’s spent 10 seasons in the NFL (five with the Detroit Lions, including their winless 2008 campaign, and five with the Seahawks, including their 2013-14 season that ended with a Super Bowl victory), and he’s taken a lot of punishment over that time, including a concussion in 2015’s Super Bowl loss to the New England Patriots and last year’s scary neck injury. He and his wife Dantia have two young sons, Xavier and Xander, and retirement should let him spend more time with his family. And he’s hugely popular in Seattle and beyond, and his Cliff Avril Family Foundation has done a lot to educate youth about healthy living and to raise money for recovery efforts in Haiti. So he seems like as good of a fit as anyone on the Seahawks to head into the sports media.

But, while plenty of former NFLers wind up in the media in one role or another, working as a co-host on a general sports radio show in a prominent time slot isn’t all that common, and it isn’t all that easy. Bart Scott’s still getting criticism for his role on WFAN, and he had previous media experience with CBS, Showtime and ESPN New York. It may be a little easier for Avril, as he doesn’t have to step into Mike Francesa’s shoes and he’s popular locally, but it’s still challenging for even someone who’s played at a high level to adapt to any media role, and a general sports radio show can be particularly tough.

Avril’s knowledge of the NFL will probably be emphasized, especially at first, but he’s probably going to have to be able to weigh in on baseball, soccer and more as well. That’s not the world’s hardest thing to do, of course, and plenty of hosts who didn’t play any sport at a high level do that daily, but taking on a general sports media role does come with perhaps more of a learning curve than a NFL-specific role. And it’s interesting that he’s diving in here full force, rather than with an evening, weekend or even one-day-a-week gig.

The timing here is nice, though, as bringing Avril on in July gives him some time to prepare. It also brings him in at a slow time of the sports calendar and one where NFL training camps are one of the next big storylines, and that’s certainly something he has plenty of experience with. And given that Avril’s a. popular locally and b. not replacing a popular host, but only joining an existing show, he’d seem likely to have an easier time of it than Scott. We’ll see how this goes for him.