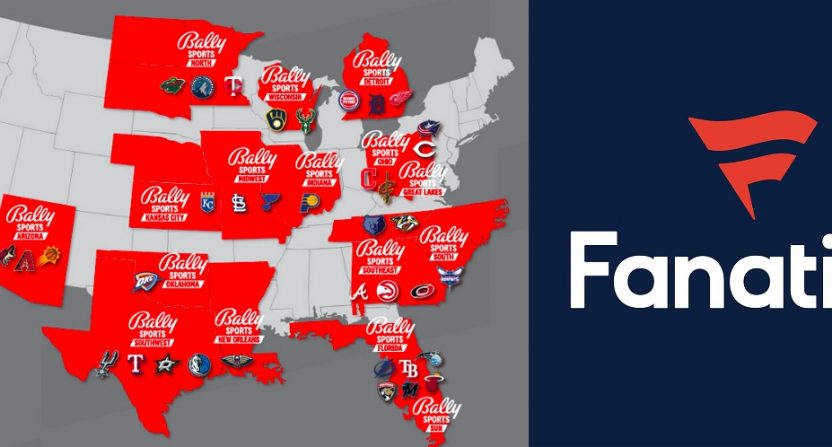 A wild story posted today by the Sports Business Journal spells out another potential shift for local sports rights, which would come out of deep left field.

Per SBJ, Fanatics, the merchandising company that has exclusive deals with numerous leagues and has slipped its way into the trading card business, could become a player in the sports media landscape.

As usual, talks are preliminary, and Fanatics is just one company that has been involved.

One of the most intriguing ideas that has been discussed recently involves Fanatics CEO Michael Rubin, an executive who has not been known for sports media deals but who has had several meetings in recent months to see if there’s a path for his company to jump into the flagging RSN business.

Rubin’s meetings with league, team, distribution and network executives have been dormant for several weeks and nothing is imminent, as sources say Fanatics is concentrating on expanding other parts of its business before tackling media.

Several sources said that these talks with Rubin could pick back up again next year. Plus, leagues, teams and media companies are considering several options beyond Fanatics.

Also of note in this article: various executive think that Diamond Sports, the Sinclair subsidiary that runs the Bally Sports RSNs, is on the road to bankruptcy.

If Fanatics were to make a move, it would need to get control of the local rights, which may be the easiest step. Sources say NBCUniversal and AT&T have been trying to find buyers for their RSNs. And top executives from leagues and media companies share a common belief that the Sinclair subsidiary Diamond Sports Group, which owns 21 Bally Sports-branded RSNs, could be headed into bankruptcy.

Sinclair has been bleeding money since purchasing the former Fox Sports RSNs for roughly $10 billion in May of 2019. Later that year, Sinclair fell into a carriage dispute with AT&T regarding the RSNs (which was eventually resolved), while fuboTV dropped the RSNs at the start of 2020. An infamous dispute erupted between Sinclair and YouTube TV prior to the start of the pandemic, with a short-term extension running through the end of the summer. Hulu then proceeded to drop the RSNs last October, and Dish stood firm in their opposition to carrying RSNs this summer, despite a carriage dispute centered around local affiliates.

But it was the pandemic, unsurprisingly, that kneecapped Sinclair’s RSNs. Last summer, it was widely reported that Sinclair would owe more in rebates than it would receive in refunds for unplayed games. In November, the company took a writedown of over $4 billion on the RSNs, along with posting an operating loss of over $3 billion for that quarter. Earlier this year, Sportico reported that Sinclair owed $1.8 billion in rights fees in 2021 alone. But hey, at least they got that $85 million, ten-year naming rights deal from Bally’s!

Would Fanatics be a *better* option than Sinclair? It’s hard to see that being true, largely because of Fanatics’ complete lack of experience in the broadcasting sphere. I don’t doubt that the company would hire and/or retain many qualified individuals to handle that part of the operation, but it’s a significant undertaking nonetheless.

While the Fanatics stuff is getting most of the headlines, I do think the concern among executives about the potential collapse of Sinclair’s RSNs is far more interesting and momentous. If those RSNs fall before a seller is found, it could create a black hole in the finances of many teams across the country, no matter if they play in a large market or a small one. Of course, there’s one domestic league that would remain virtually unaffected: the NFL, with its $100 billion in national TV deals. The end of the RSN model, especially if a direct to consumer option never comes to fruition, would simply further the gap between the NFL and the other pro sports leagues in the US. There wouldn’t be a “Big Four” anymore (you could argue there’s not a big four today, and I’d hang up and listen) – there would be the NFL, a gap, college football, another gap, and then the NBA, NHL, MLB, and the rest in whatever order.