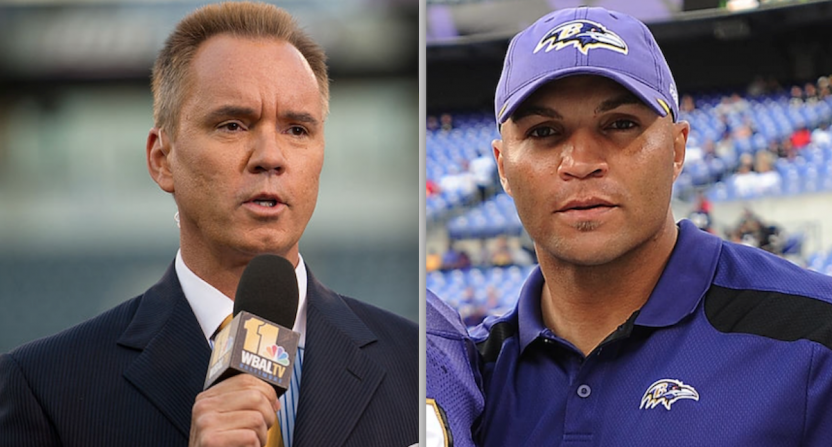 A fan at Sunday’s Baltimore Ravens game really wanted a drink. Late in the first quarter of the Ravens’ Week 7 game versus the Cincinnati Bengals, someone attempted to climb into the Ravens’ radio broadcast booth in an attempt to find an adult beverage.

Yes, that’s right: The fan tried to climb into the booth. This wasn’t someone walking into the wrong door or trying to crash a luxury suite.

Listeners to the Ravens’ broadcast on WBAL NewsRadio 1090 AM/ 101.5 FM and 98 Rock (97.9 FM) — or even nationally via TuneIn — heard the disruption live during the game when analyst Obafemi Ayanbadejo addressed the fan attempting to enter the booth.

Insane moment on Ravens radio as a fan tries to climb into the broadcast booth looking for a drink: pic.twitter.com/RIA8lQjk4v

Neither play-by-play broadcaster Gerry Sandusky nor Ayanbadejo said anything for approximately 17 seconds as the situation was presumably being resolved (via the Baltimore Sun). Sandusky then resumed calling the action before explaining to the radio audience what had happened.

“If you were listening, you heard Femi say ‘What are you doing? What are you doing?’ He was not talking to the players or the coaches. We actually had a fan who was trying to climb into the broadcast booth,” Sandusky said. “She said, ‘I’m a veteran and I’m looking for a drink.'”

“Yeah, I don’t serve drinks at the game,” replied Ayanbadejo responded. “I might make some cocktails at home but this is not the time or place.”

No word on what happened with the fan after the incident. Was she corraled by security or police and eventually ejected from the stadium? Did she go back to her seat? Did she attempt to climb into some other booth or suite in her quest for a drink? Did she finally get the beverage she was seeking?

Hopefully, we get some follow-up to this story in the days to come.