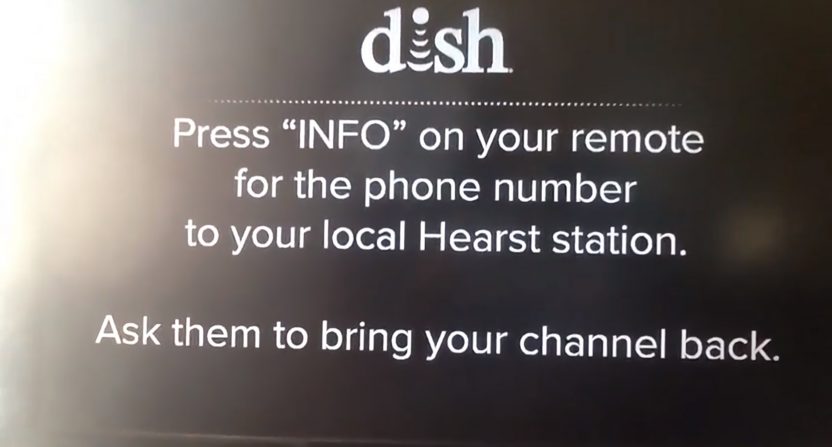 After an extended dispute that left 33 stations in 26 markets dark on Dish Network, Hearst Television is now back. Dish and Hearst had fought over transmission fees and on March 3, the stations’ signals were pulled. Both sides had dueling statements blaming the other side, Hearst began a countdown clock and they stopped talking to each other until this week when they finally hashed out an agreement.

Hearst Television is happy to be back on Dish:

“We are grateful to once again have Hearst Television stations providing Dish customers the quality local and national programming which we invest so heavily to offer our local communities,” said Hearst Television President Jordan Wertlieb in a statement “We are thankful to Dish subscribers and to our supportive advertisers for their extraordinary patience during this prolonged process.”

“DishNetwork L.L.C., a wholly owned subsidiary of Dish Network Corporation (NASDAQ: DISH), has reached a multi-year agreement with Hearst Television Inc. for carriage of the broadcaster’s local channels in 26 markets across 30 states,” Dish said in its statement. “Terms of the agreement were not disclosed.”

Hearst has stations in Baltimore, Boston, Cincinnati, Kansas City, Orlando, Pittsburgh and several other markets across the country. With 15 ABC affiliates, 12 NBC stations and two with CBS, it restores regular programming and some live sports that had been missing for almost eight weeks. It brings to an end one of the more hostile carriage disputes, but at the same time, it assures subscribers that the Hearst stations will remain on Dish for the long-term.