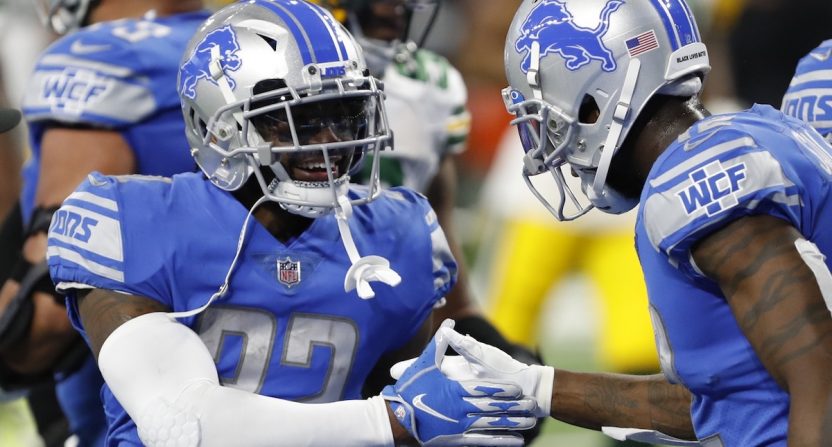 Why write about the Detroit Lions switching radio flagship stations here? (Other than the guy writing this post is an eternally suffering Lions fan?) Hey, that’s a good question.

Sports team radio broadcast affiliates are as local as it gets in sports media. Jumping from WJR-AM to WXYT-FM (an Entercom station) is a move that will likely only interest dedicated fans of the perenially beleaguered NFL franchise located in metro Detroit, throughout Michigan, and even parts of Ohio.

But what makes the Lions’ move intriguing is that the team left WXYT — otherwise known as 97.1 The Ticket — four years ago because management wasn’t happy with the frequent criticism coming from the station’s afternoon drive-time host, Mike Valenti.

In November 2015, Valenti confirmed on the air that the Lions tried to get him fired, despite his show being the top-rated in the Detroit market.

According to him, the tensions with the team became “very personal.” The Lions’ senior vice president of communications regularly called the station between segments of Valenti’s show to dispute what had been said on the air. Valenti also alleged that the Lions prevented him from appearing on local TV and doing a Sunday morning NFL show.

Yet as the Detroit News‘ Tony Paul points out, while displeasure over Valenti’s commentary was certainly a factor in leaving 97.1 The Ticket after an 18-year partnership, WJR also paid much more for radio broadcast rights for Lions football games.

When the #Lions left 97.1 The Ticket five years ago, yes, it was A LOT about their disdain for Mike Valenti. They STILL won't admit it (shocker), but that played a factor. But was it the No. 1 factor? No. WJR gave the #Lions a million bucks more than The Ticket.

Apparently, tensions between the Lions and The Ticket have settled down over the past four years. (Valenti isn’t going anywhere, since he hosts the top show in the market.) Or perhaps the team preferred to be on a higher-rated station in Detroit, one dedicated full-time to sports. In the most recent ratings, WXYT ranked fifth in the market while WJR placed ninth.

On Friday, team president Rod Wood appeared on 97.1 The Ticket’s morning show with Mike Stone and Jon Jansen to discuss the team’s search for a new general manager and head coach. And the conversation began with announcing the new radio broadcast deal. But Stone couldn’t resist addressing the proverbial elephant (or should that be “lion” in this case) in the room.

Talking to #Lions ? president Rod Wood about the new radio deal with ⁦@971theticketxyt⁩, @stoney16 addresses past tensions between the team and station: pic.twitter.com/xDSdm5JKJ8

“You guys develop a little thicker skin over the last few years?” Stone asked Wood. “How did this go down?”

Wood laughed, but wouldn’t take the bait. “I know what you’re referring to,” he said. “But I’m not going to comment on that. Whatever’s past is past.”

The Lions’ broadcast deal with 97.1 The Ticket begins with the 2021 season, though complete terms of the agreement were not announced. In addition to live game broadcasts (with Dan Miller expected to return for play-by-play), pre- and post-game shows, and exclusive player interviews, other Lions-related shows and features will be a part of the station’s programming.